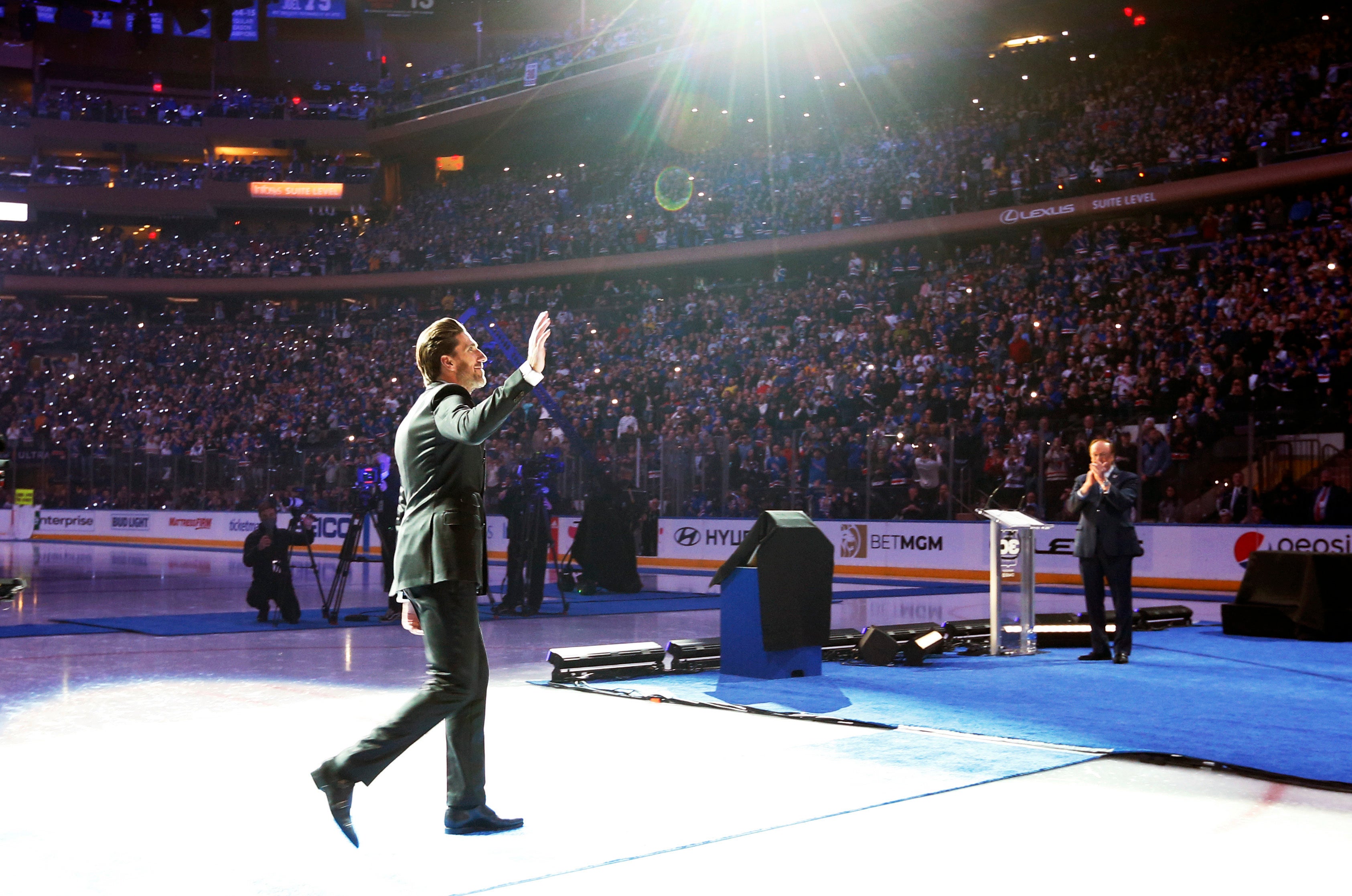 The King has taken his throne in the rafters at Madison Square Garden.
Henrik Lundqvist became the 11th player to have his number retired by the New York Rangers when a banner with his name and No. 30 was raised at the Garden before the team’s game against the Minnesota Wild on Friday night.
The Swedish goalie spent his entire 15-year playing career with the Rangers after being selected in the seventh round of the 2000 NHL draft, finishing with a record of 459-310-96 with a 2.43 goals-against average and .918 save-percentage. After the 2019-20 season, he had the final year of his contract bought out by New York and signed with Washington for the ensuing shortened season but did not play after having heart surgery. 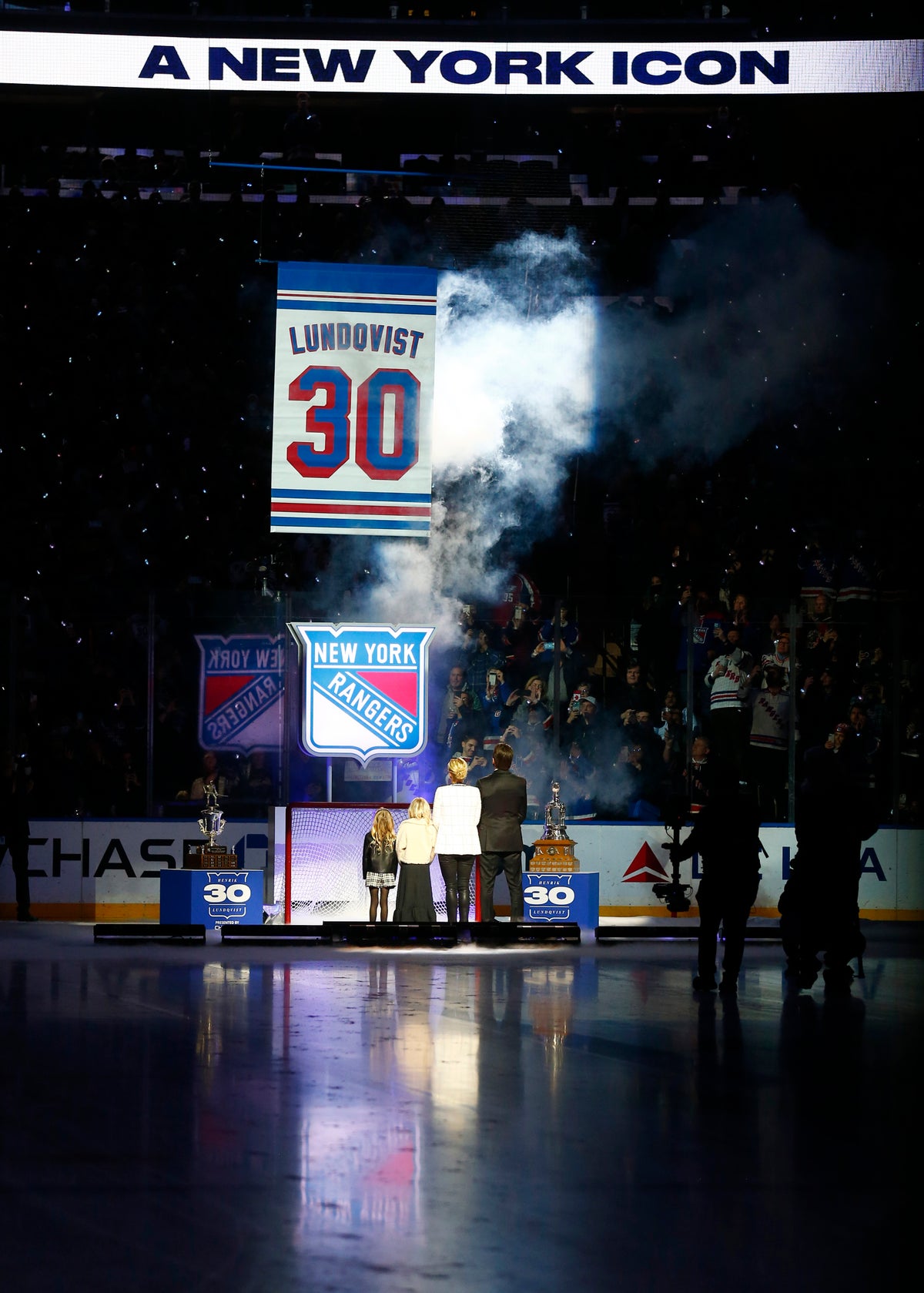 The 39-year-old Lundqvist, a fan favorite in New York from the start of his stellar career, received an ovation and cheers of “Hen-rik! Hen-rik!” from the crowd when he was announced and walked out on the blue carpet on the ice, and then again when he was called to the podium by Rangers broadcaster Sam Rosen.
“When I look back at my 15 years here, what gives me the most satisfaction it's not the wins or the personal recognition but its really the commitment," Lundqvist said. "The commitment I felt to the New York Rangers and the commitment they showed me for so long.”
Lundqvist became third Rangers goalie to have his jersey retired, joining Ed Giacomin (1) and Mike Richter (35). Brian Leetch (2), Harry Howell (3), Rod Gilbert (7), Andy Bathgate (9), Adam Graves (9), Vic Hadfield (11), Mark Messier (11), and Jean Ratelle (19) also have been honored.
“I'm so happy I get an opportunity to say thank you to all the amazing in here and around this great city," said Lundqvist, who was interrupted with more chants of “Hen-rik!” during his speech. "You have supported me throughout my great career. It's been an amazing experience and its given me so much joy.”
Lundqvist was joined for the ceremony by his parents Peter and Eva, twin brother Joel, sister Gabriela, wife Therese, daughters Charlise and Juli. Richter, Leetch, Graves and Messier were also in attendance. Current Rangers players sat on the bench during the ceremony, all wearing No. 30 jerseys and Lundqvist’s name on the back. Wild players, including former teammate Mats Zuccarello were also present.
Lundqvist appeared in five All-Sar games and is sixth in NHL history in wins. He also holds the Rangers’ franchise records for victories (459), playoff wins (61), shutouts (64) and games played (887). He currently serves as a studio analyst on MSG Networks’ pregame and postgame shows.
He was presented with a Rangers-themed electric guitar painted by Dave Gunnarson - the Swedish artist who painted many masks Lundqvist used during his career - and presented by tennis great John McEnroe, a framed collection of 74 pucks from his each of his regular season and playoff shutouts, three bottles of wine from Vineyard 36, and a custom Louis Vuitton steamer trunk with his No. 30 on it.
“People that know me and played with me know that I was pretty intense,” Lundqvist said. "I didn't talk much. ... Teammates learned pretty quickly that a conversation with me on a game day, that would be a pretty short conversation.
“The highs were high, but the lows were low and there was not much in between. That's how I choose to live my life for the past 20 years, and 15 here in New York, never really changed. Playing well and trying to help the team win, that was so important to me. Was it extreme? Probably. Was it healthy? Only when we were winning. That contrast I felt between winning and losing really pushed me throughout my career."
Lundqvist also spoke with media hours before the ceremony, joined by his wife, Therese, and daughters, along with Rangers general manager and president Chris Drury and former GM and president Glen Sather - now a senior advisor.
“I can honestly say knowing Hank and playing with Hank that he’s given me the easiest answer I’ll ever have. We want to be like Hank,’’ Drury said. “His desire, his determination, his will to win … his commitment to the community and the city. He is the gold standard of what a New York Ranger is.”
Sather recalled seeing Lundqvist play in Gothenburg, Sweden, back in 2004, a year before he joined the Rangers.
“I said, this is ‘the next one.’ Sather said. “I’d only seen him one game. There was something about him, the way he electrified the crowd. His poise. The way he conducted himself.”
Lundqvist is the first Rangers player to have his number retired since Hadfield on Dec. 2, 2018.
___
Freelance writer Allan Kreda contributed to this report.
___
Follow Vin Cherwoo at http://www.twitter.com/VinCherwooAP
___
More AP NHL: https://apnews.com/hub/NHL and https://twitter.com/AP_Sports
(Copyright 2022 The Associated Press. All rights reserved. This material may not be published, broadcast, rewritten or redistributed without permission.)
1/28/2022 8:16:50 PM (GMT -5:00)
Related Stories