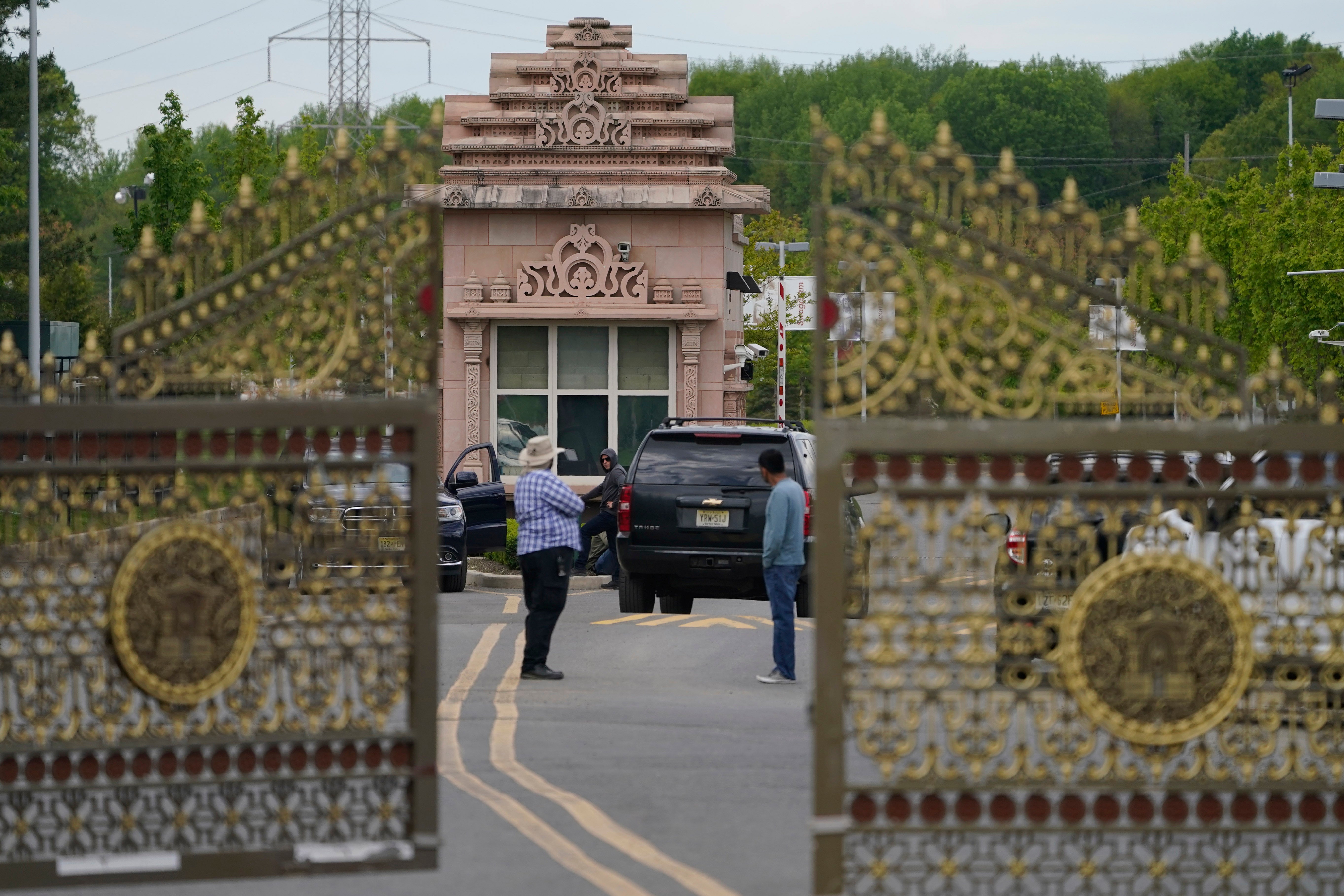 FBI agents were at the sprawling site of a Hindu temple Tuesday as a lawsuit filed in federal court alleged workers from marginalized communities in India were lured to the U.S. and forced to work long hours for just a few dollars per day to help build the temple.
The lawsuit accuses the leaders of the Hindu organization known as Bochasanwasi Akshar Purushottam Swaminarayan Sanstha, or BAPS, of human trafficking and wage law violations.
An FBI spokesperson confirmed that agents were at the temple on “court-authorized law enforcement activity.” One of the attorneys who filed the suit said some workers had been removed from the site Tuesday.
That attorney, Daniel Werner, called it “shocking that this happens in our backyard.”
“It is even more disturbing that it has gone on for years in New Jersey behind the temple’s walls,” Werner, of Decatur, Georgia, said Tuesday outside the gates of the temple. “This is 200 workers who were behind these fences for sometimes a year or two years or even longer, paid about $1.20 an hour, working in hazardous conditions, not allowed to leave through these gates without being accompanied by somebody from BAPS.”
The lawsuit says more than 200 workers — many or all of whom don't speak or understand English — were coerced into signing employment agreements in India over the last several years to work at the Hindu temple in Robbinsville, outside Trenton. They traveled under R-1 visas, which are meant for “those who minister, or work in religious vocations or occupations,” according to the lawsuit.
When they arrived, the lawsuit says, their passports were taken away and they were forced to work at the temple from 6:30 a.m. to 7:30 p.m. with few days off, for about $450 per month. That wage works out to roughly $1.20 per hour.
Of the $450, the workers allegedly only received $50 in cash per month, with the rest deposited into their accounts in India.
The workers lived in a fenced-in compound where their movements were monitored by cameras and guards, according to the lawsuit, and they were told that if they left, police would arrest them because they didn't have their passports.
Messages were left Tuesday at telephone numbers listed for BAPS in New Jersey. BAPS CEO Kanu Patel, who is named as a defendant in the lawsuit, told The New York Times: “I respectfully disagree with the wage claim.”
A spokesperson for the organization, Lenin Joshi, disputed the allegations.
“We are naturally shaken by this turn of events and are sure that once the full facts come out, we will be able to provide answers and show that these accusations and allegations are without merit,” Joshi told the Times.
The lawsuit also names BAPS and several individuals described as having supervised the workers. It seeks unpaid wages and unspecified compensatory and punitive damages.
___
Associated Press writer Mike Catalini contributed to this report.
Related Stories

Nassau DA: East Rockaway man had arsenal of ghost guns at his home

Police: Man dies after being found underwater in Candlewood Lake