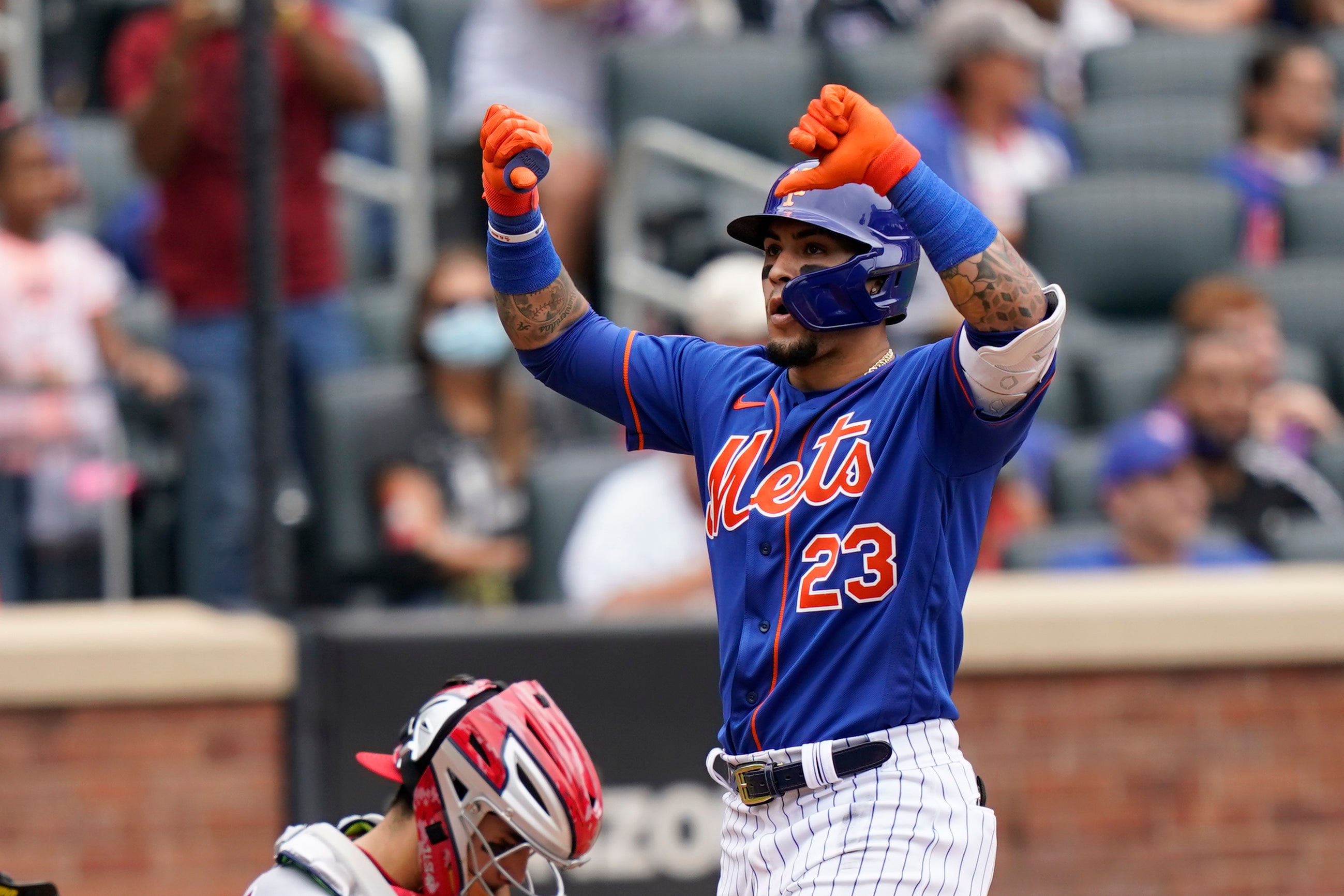 Javier Báez and his New York Mets teammates turned the boos at Citi Field to cheers this weekend - and turned their thumbs upside down at frustrated fans.

Báez launched a 444-foot home run Sunday in a 9-4 win over the Washington Nationals, then flashed a double thumbs-down gesture toward the crowd on his way back to the dugout.

Later, he said Mets players have been making the hand signal after big hits in response to fans who have jeered the club during a rough August.

Báez, a two-time All-Star acquired from the Chicago Cubs last month, good friend Francisco Lindor and Kevin Pillar all were seen giving the thumbs-down during the win.

Mets President Sandy Alderson swiftly condemned those remarks and signs.
“These comments, and any gestures by him or other players with a similar intent, are totally unacceptable and will not be tolerated,” Alderson said in a statement.

"Mets fans are understandably frustrated over the team’s recent performance. The players and the organization are equally frustrated, but fans at Citi Field have every right to express their own disappointment. Booing is every fan’s right.

“The Mets will not tolerate any player gesture that is unprofessional in its meaning or is directed in a negative way toward our fans. I will be meeting with our players and staff to convey this message directly,” he said.

The Mets are 8-19 this month, dropping them from the NL East lead to third place, 7 1/2 games behind the division-leading Atlanta Braves.

Báez, who is batting .210 with 22 strikeouts in 62 at-bats since being traded on July 30, said the booing doesn’t bother him but that it is discouraging.

“I love the fans and I like playing for the fans,” Báez said. “But we can’t have our fans against us.”

Manager Luis Rojas, who heard chants of “Fire Rojas” during a loss to the San Francisco Giants on Wednesday night, said he wasn't aware what the downturned thumbs meant.

Rojas said the reaction by Báez could be part of the adjustment process following the first trade of his career. Lindor, who signed a 10-year extension before playing a game with the Mets, and Pillar are also in their first years in New York.

“I think it’s something that he’s probably getting used to - it’s the first time he’s had another uniform,” Rojas said. “Probably that’s why he’s sharing (and) venting. It’s a learning experience. There’s different guys that probably felt that way coming into here and probably not performing immediately. But they learned how to deal with it and they know where the fanbase is coming from.”

Said Alderson: “Mets fans are loyal, passionate, knowledgeable and more than willing to express themselves. We love them for every one of these qualities.”

Lindor forced a run-scoring balk and hit a two-run double and new leadoff hitter Jonathan Villar hit a two-run homer as the Mets won the final two games of the three-game sert. It was their first series win since sweeping three from the Nationals on Aug. 10-12.

Villar missed the cycle by a double and scored three times. He and Brandon Nimmo, who moved from leadoff to the second spot Saturday, combined to reach base seven times in 10 plate appearances.

Báez's homer put the Mets ahead for good 3-2 in the fourth inning.

Pete Alonso had an RBI single among his three hits and Dominic Smith delivered a run-scoring, pinch-hit single.

Josh Bell homered twice and Juan Soto also connected for Washington. Those were the Nationals' only three hits.

Soto homered off Aaron Loup leading off the sixth - the first homer surrendered by the Mets lefty to a a left-handed hitter since Tampa Bay's Corey Dickerson connected in 2017.

Bell homered again in the eighth. The two-homer game was the first of the season for Bell and the sixth of his career.

Fedde allowed five earned runs on eight hits, including the homers by Báez and Villar, in 5 1/3 innings.

“The pitch to Baez and the one to Villar were just pretty bad pitches in general,” said Fedde, who whirled and crouched as soon as Báez made contact on his homer.

Most oddsmakers are betting on Nets to win 2022 NBA title

'Once a Giant, always a Giant.' Eli Manning's No. 10 retired at MetLife Stadium

Flyers' Hayes has abdominal surgery, to miss start of season