Diocese says McCarrick to stay at friary for now 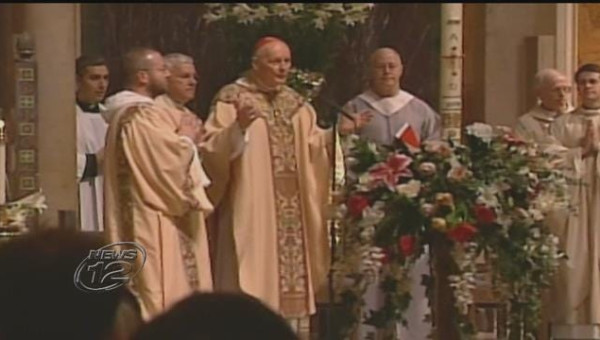 A Kansas diocese says disgraced former Cardinal Theodore McCarrick will continue to live at a local friary "until a decision of permanent residence is finalized."
McCarrick had moved to the St. Fidelis Friary in Victoria, Kansas, in September after Pope Francis ordered him to live in penance and prayer while the investigation into his actions continued.

McCarrick was defrocked after being found guilty by the Vatican of sex abuse, including while hearing confession.

In a statement Saturday, Bishop Gerald L. Vincke of the Salina, Kansas, diocese said he hopes the Vatican's decision will "help bring healing to all affected by sexual abuse and those hurt by this scandal."

The cardinal of Newark, New Jersey, is thanking Pope Francis for his leadership on the church investigation of ex-cardinal Theodore McCarrick.

McCarrick was Newark archbishop for 14 years. He was defrocked after being found guilty by the Vatican of sex abuse, including while hearing confession.

Newark Cardinal Joseph Tobin said Saturday it's "profoundly disheartening and disturbing" to know that McCarrick acted "contrary to the Christian way of life as well as his vocation as a priest."

Tobin, who was named a cardinal by Francis, expressed gratitude to the pontiff "for his leadership throughout this difficult investigation and decision."

Last year, Tobin said the archdiocese never received an accusation that McCarrick abused a minor, but that it and another New Jersey diocese received three allegations of sexual misconduct with adults decades ago. Two of those resulted in settlement.

A U.S. lay Catholic group wants those who "looked the other way" as Theodore McCarrick rose to cardinal's rank even despite abusing others be held accountable.

The Catholic Association, a conservative group, in a statement Saturday, called McCarrick's defrocking "only a first step" in ridding sexual abuse from all levels of the church.

It said much must be done to hold accountable "those in the church hierarchy who looked the other way as McCarrick rose through their ranks" and also to ensure that priestly celibacy is restored and youths are safeguarded from sexual abuse.

The group noted that Pope Francis' summit on sexual abuse starts on Thursday.

The Vatican said its investigation found McCarrick, who had served as archbishop in Washington, D.C., guilty of sexual crimes including solicitation in the confessional.

A U.S. Catholic church leader says the Vatican's defrocking of former cardinal Theodore McCarrick shows no bishop is above the church's law.

Cardinal Daniel DiNardo, whose own credibility in handling clergy abuse cases has recently been questioned, in a statement on Saturday called the punishment of a once-powerful American prelate "a clear signal that abuse will not be tolerated."

DiNardo says "no bishop, no matter how influential, is above the law of the church."

He leads the U.S. Conference of Catholic Bishops, which is based in Washington, D.C., the city where McCarrick had served as archbishop.

DiNardo's handling of abuse cases in Houston has come under question. Two people who said they were abused by a local priest have said they felt DiNardo didn't do enough to stop the priest.

An advocate for church accountability over sex abuse is demanding Pope Francis say what he knew about Theodore McCarrick, the disgraced former U.S. cardinal.

The Vatican said Saturday that Francis had approved McCarrick's defrocking for having solicited sex in the confessional and other church crimes.

Anne Barrett Doyle of BishopAccountability.org says while his defrocking is significant, "most abusive bishops have escaped" defrocking. She says Francis should use the power of his office to laicize those bishops immediately.

Francis should also say "what he knew and when" about McCarrick.

Doyle is in Rome for the pope's gathering of bishops about the crisis.

She says of the 101 accused bishops her group has tracked, McCarrick is only the seventh to be laicized. McCarrick was the first churchman who reached the rank of cardinal to be defrocked in the scandals.

One of the victims of defrocked ex-cardinal Theodore McCarrick victims is expressing relief that Pope Francis believed his accusations of years-long sex abuse.

In a statement released by his lawyer Saturday, James Grein said he participated in the church trial of McCarrick "with profound sadness."

Grein, the son of a friend of McCarrick, says that while he can't regain his childhood, "today I am happy that the pope believed me." He accused McCarrick of sexually abusing him for some two decades from age 11, including during confession.

He adds he hopes that McCarrick will no longer be able to use the power of "Jesus' church to manipulate families and sexually abuse children."

Grein says "it's time for us to cleanse the church." He testified in December in New York before a Vatican-appointed investigator.

The punishment announced on Saturday for the once-powerful prelate and Archbishop of Washington comes a few days before Pope Francis is to lead an extraordinary gathering of bishops from around the world over the sex abuse crisis which has eroded the faith of many Catholics and threatened his papacy.

Defrocking means McCarrick, 88, who now lives in a friary in Kansas after he lost his title of cardinal last year, won't be allowed to celebrate Mass or other sacraments.
(Copyright 2019 The Associated Press. All rights reserved. This material may not be published, broadcast, rewritten or redistributed.)
2/16/2019 4:56:39 PM (GMT -5:00)
Share this story