In mourning yet again, NYC prepares to honor fallen officer

By: Associated Press
A city reeling from a recent spate of violence prepared to lay to rest a rookie police officer being hailed as an inspiration to his immigrant community, as investigators sought to make sense of a domestic dispute that left another officer “fighting for his life.”
Funeral services for New York City Police Officer Jason Rivera were being finalized, as his comrades in blue mourned the loss of the 22-year-old who joined the force to make a difference in what he had described as a “chaotic city.”
MORE: Donate to Rivera family
A solemn scene unfolded Sunday with a column of uniformed police officers, as well as a line of firefighters, flanking the streets as a hearse carrying the fallen officer left the medical examiner’s office.
Burial rites were scheduled for Friday, city officials said, while services were to be held Thursday at St. Patrick's Cathedral.
Rivera and Officer Wilbert Mora were shot Friday night while answering a call about an argument between a woman and her adult son. Mora, 27, suffered a serious head wound, police said.
MORE: Harlem Shooting: Cardinal Timothy Dolan visits critically injured NYPD officer
During a Sunday morning appearance on CNN, Mayor Eric Adams stressed the urgency “to deal with the underlying issues that are impacting crime in our city and has become a stain on the inner cities across our country.”
He said his police force would revamp a plainclothes anti-crime unit aimed at getting guns off the streets. The unit had been disbanded in 2020 over concerns it accounted for a disproportionate number of shootings and complaints.
CHOPPER 12: Chopper 12 above police procession in support of officers Rivera, Mora
“The symbol of that soiled coat with red blood is really what we’re talking about here in not only New York City, but across America,” Adams said.
The medical examiner ruled Rivera’s death a homicide after an autopsy found he died from gunshot wounds to the head and torso.
Mora, who has been with the NYPD for four years, remained in life-threatening condition, Adams said Sunday. Police said he was to be transferred from Harlem Hospital to NYU Langone Medical Center.
“It just really has impacted our entire city, if not the entire country. And this is coming after having five officers shot, the 11-month baby shot in Brooklyn,” the mayor said.
The shooting is the latest in a string of crimes that have unnerved the nation's most populous city and the country's largest police force, with 36,000 officers.
In the three weeks since Adams took office, a 19-year-old cashier was shot to death as she worked a late-night shift at a Burger King, a woman was pushed to her death in a subway station, and a baby was critically injured when she was hit by a stray bullet as she sat in a parked car with her mother. With the Harlem shooting Friday night, four police officers had been shot in as many days.
The man police say shot them, Lashawn J. McNeil, 47, also was critically wounded and hospitalized, authorities said.
Details about what led to the deadly confrontation were still emerging.
Officials said a woman who made an emergency call Friday said she was ill and that her son who had come up to take care of her had become “problematic.” Adams said the woman did not specify the problem.
INTERVIEW: Pastor Staci Ramos speaks to News 12 following the shooting
Authorities said three officers went to the apartment after the call came in. The officers spoke with the woman and another son, but there was no mention of a weapon, police said.
After Rivera and Mora walked from the front of the apartment down a narrow hallway to check on McNeil, he swung open a bedroom door and began shooting, police said. Both officers were gunned down before they could pull their weapons and defend themselves, police said. 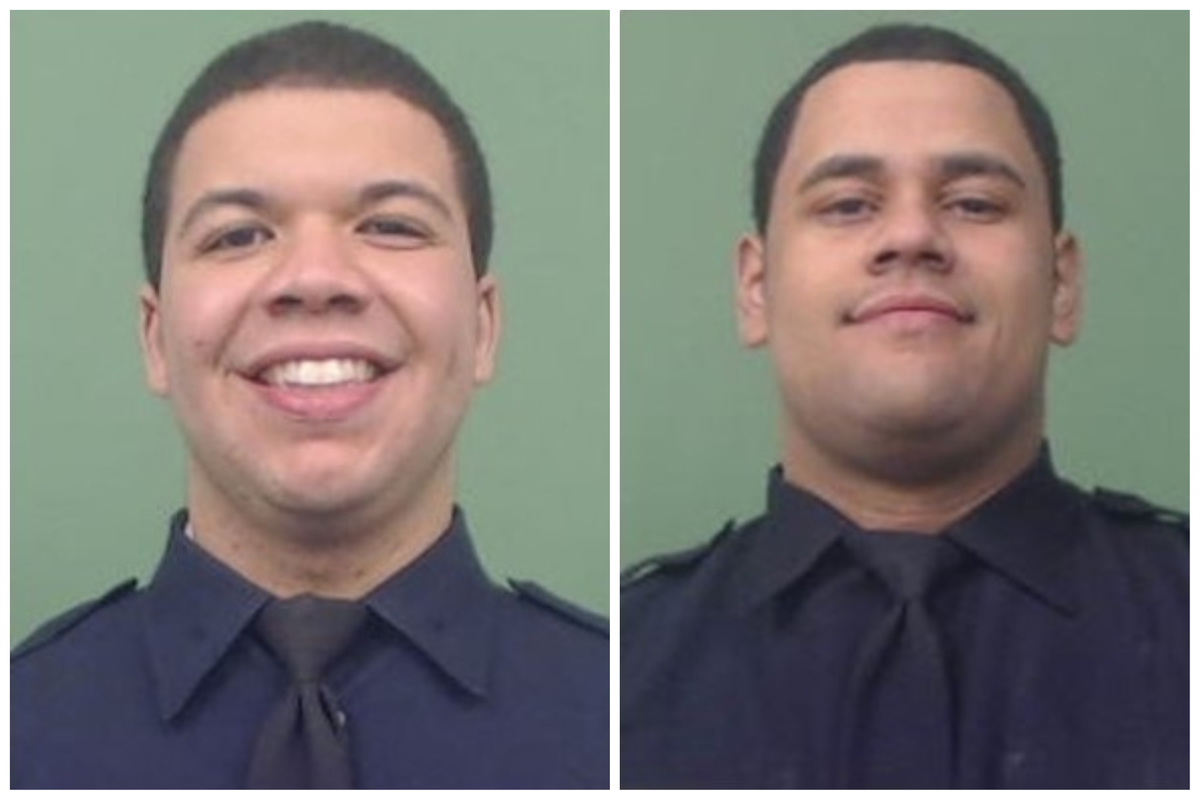 Officers Jason Rivera (left) and Wilbert Mora (Right) - NYPD
As McNeil tried to flee, a third officer who had stayed with McNeil’s mother in the front of the apartment shot at McNeil and wounded him in the head and arm, NYPD Chief of Detectives James Essig said.
McNeil had a 2003 drug conviction in New York City. He also had several out-of-state arrests. In 1998, he was arrested in South Carolina on suspicion of unlawfully carrying a pistol, but records show the matter was later dismissed. In 2002, he was arrested in Pennsylvania on suspicion of assaulting a police officer, Essig said.
McNeil had been married but the couple separated nearly two decades ago, according to Theresa Noa, who is married to his ex-wife's brother. She said McNeil had four children from that marriage.
Police said the gun used in Friday night’s shooting, a .45-caliber Glock with a high-capacity magazine capable of holding up to 40 extra rounds, had been stolen in Baltimore in 2017.
Adams and Gov. Kathy Hochul both said federal authorities need to do more to round up stolen guns like the one used in the Harlem shooting. Hochul, at an appearance in Buffalo on Saturday, called it a “scourge of illegal guns on our streets.”
Rivera joined the force in November 2020.
Growing up in Manhattan’s Inwood neighborhood, he noticed tensions with police, according to a brief essay titled “Why I Became a Police Officer,” a copy of which was obtained by The Associated Press.
In that essay, Rivera wrote about how he was bothered by witnessing his brother being stopped and frisked. But his attitudes changed when he also saw how the department was trying to improve relationships with communities.
“I realized how impactful my role as a police officer would go in this chaotic city,” he wrote.
Related Stories

Haverstraw man pleads guilty to sexual conduct against a child

Police: Peekskill park to close at night to curb vandalism and illegal dumping