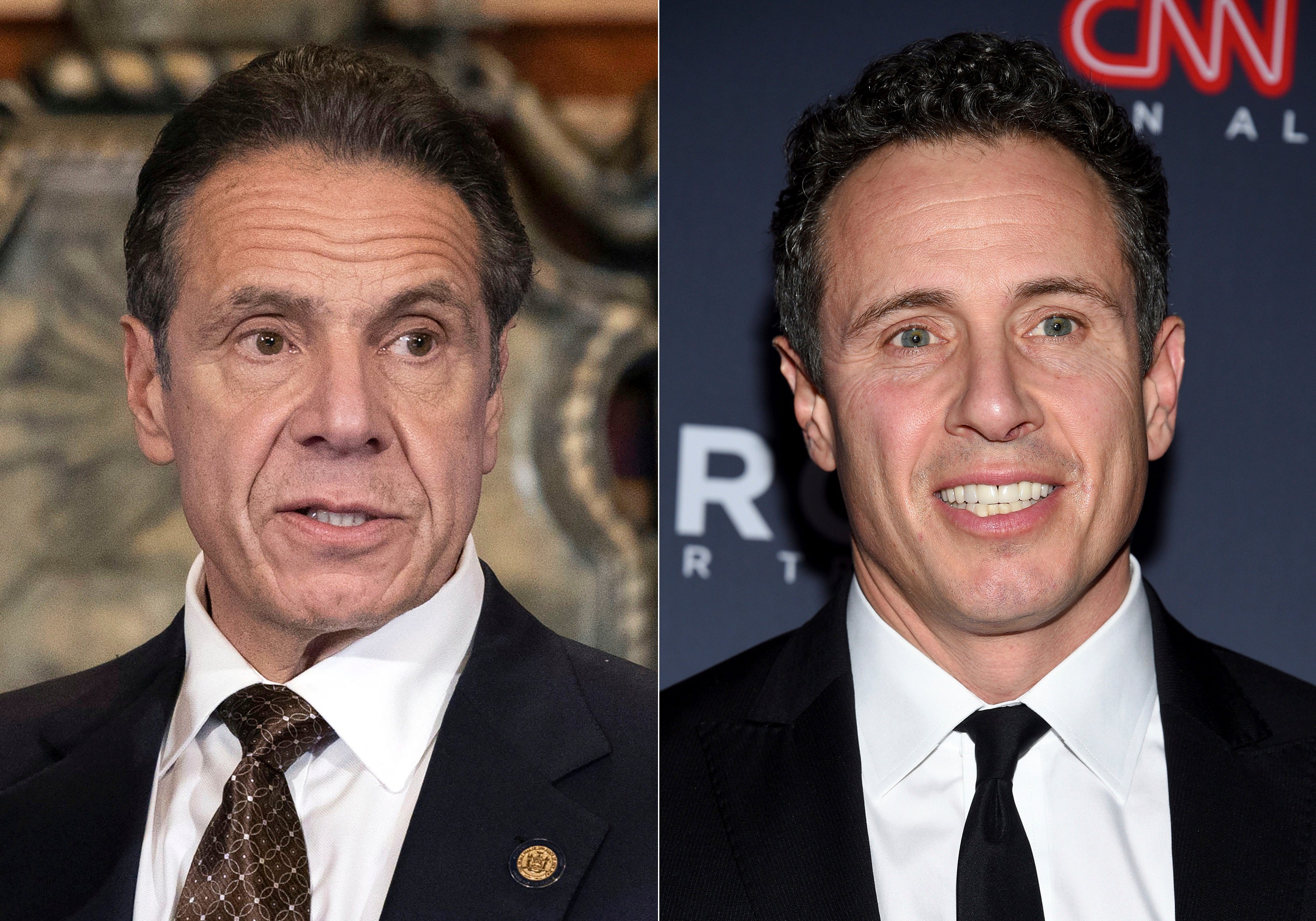 Transcripts released Monday shed new light on CNN anchor Chris Cuomo's behind-the-scenes role advising his brother, former New York Gov. Andrew Cuomo, in the face of sexual harassment allegations that forced him from office.
Chris Cuomo told investigators he spoke regularly with his brother, exchanged text messages with his top advisers and was looped in on emails in February in March as they formulated a response to allegations from multiple women.
He also offered to help try and find out through his “sources” whether more women were going to come forward, including possibly learning their identities.
Chris Cuomo’s role as his brother’s unofficial adviser was previously known. After some details of his work were highlighted in an August report by state Attorney General Letitia James, the journalist acknowledged it was a “mistake” to have joined in strategy calls with a group of his brother’s advisors.
But a transcript of Chris Cuomo's July interview with investigators, as well as the release of 169 pages of emails, text messages and other communications offer more detail on his involvement in shaping his brother’s message - and acting as a bulldog sparring with top aides over strategy.
“I was worried that this wasn’t being handled the right way, and it’s not my job to handle it, okay?” Chris Cuomo testified. “I don’t work for the governor. I’m not defending him in this matter. I’m not covering it. You know, this is - this is not what I do.”
“I am worried about my brother and worried that this is being handled the best way it can. And my feeling was that, to my basic mantra, you need to tell the truth and get in front of these if you have something to say. And if you have something to own, you need to do that as well,” he said.
Andrew Cuomo resigned in August to avoid a likely impeachment trial, in the wake of an independent investigation that found he sexually harassed at least 11 women.
Chris Cuomo, the host of CNN's “Cuomo Prime Time,” has defended himself by saying he never reported on Cuomo’s situation for CNN and never tried to influence coverage.
“I tried to do the right thing,” the host said on-air in August, adding that he “wasn’t in control of anything.”
A message to CNN representatives for comment was not immediately returned.
The transcript of Chris Cuomo's interview was part of a new batch of materials released Monday by the attorney general's office, gathered during its monthslong investigation into the governor's conduct with women.
A copy of Gov. Cuomo's video testimony was released for the first time. Transcripts of it had previously been made public.
The attorney general also released transcripts or videos of interviews with several of Cuomo's key aides and advisors, who described their efforts to defend him against harassment allegations.
The governor's former top aide, Melissa DeRosa, wiped away tears as she told investigators about a tense conservation she had in a car with Cuomo when she confronted him about his interactions with a former aide, Charlotte Bennett, who said she felt like the governor was hitting on her. Bennett said he also made her uncomfortable with unwanted comments about her experience as a sexual assault survivor.
“I can’t believe you put yourself in a situation where you would be having any version of this conversation,” DeRosa said, recalling what she said to Cuomo.
DeRosa said the car stopped at a traffic light and she got out of the car.
DeRosa said after Bennett’s allegations, the governor's office no longer left Cuomo alone with junior staff.
DeRosa testified that the change was similar to the “Graham-Pence” rule, referring to former U.S. Vice President Mike Pence’s practice of never eating alone with a woman other than his wife. That policy was inspired by former Evangelist Billy Graham’s preaching.
“She thought that it was important that there were always two people together, if it was a junior staff person, so that there couldn’t be any misperceptions or any conversations that could happen,” DeRosa said, referring to former special counsel Judith Mogul.
___
Villeneuve reported from Albany.
(Copyright 2021 The Associated Press. All rights reserved. This material may not be published, broadcast, rewritten or redistributed without permission.)
11/29/2021 2:58:15 PM (GMT -5:00)
Related Stories

Montville police search for missing mother, 2 children; say they may be in danger

Chill out: New poll ranks NYC is most stressed-out city in the U.S.