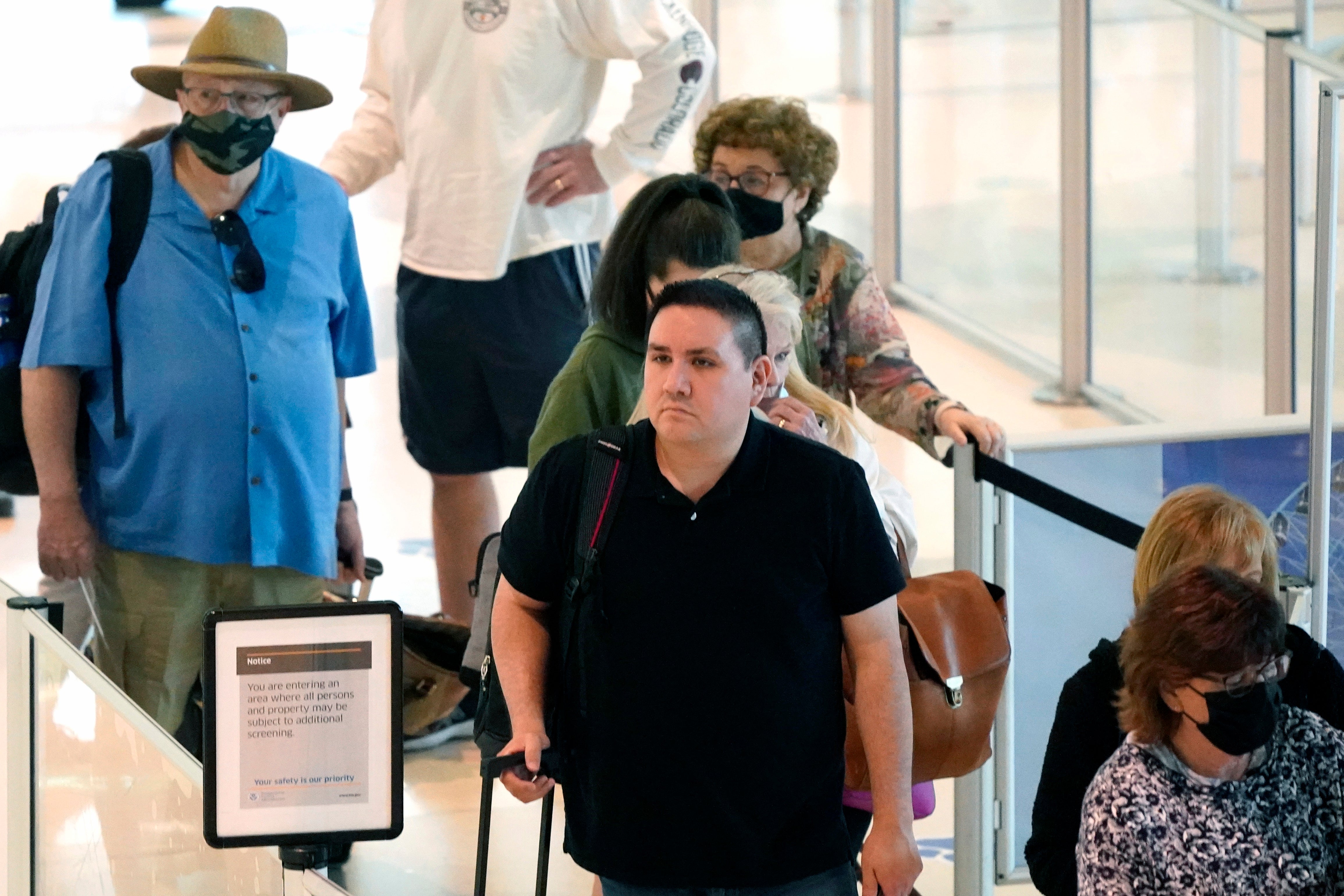 A majority of Americans continue to support a mask requirement for people traveling on airplanes and other shared transportation, a new poll finds. A ruling by a federal judge has put the government’s transportation mask mandate on hold.
The poll by The Associated Press-NORC Center for Public Affairs Research finds that despite opposition to that requirement that included verbal abuse and physical violence against flight attendants, 56% of Americans favor requiring people on planes, trains and public transportation to wear masks, compared with 24% opposed and 20% who say they’re neither in favor nor opposed.
Interviews for the poll were conducted Thursday to Monday, shortly before a federal judge in Florida struck down the national mask mandate on airplanes and mass transit. Airlines and airports immediately scrapped their requirements that passengers wear face coverings.
The Transportation Security Administration stopped enforcing the mask requirement, and the Justice Department announced on Tuesday that it will not appeal the ruling unless the Centers for Disease Control and Prevention determines it's still necessary.
The poll shows a wide partisan divide on the issue. Among Democrats, 80% favor and just 5% oppose the requirement. Among Republicans, 45% are opposed compared with 33% in favor, with 22% saying neither.
Vicki Pettus, who recently moved from Frankfort, Kentucky, to Clearwater, Florida, to be near her grandchildren, said she enjoys the view of Old Tampa Bay but doesn't like the “very lackadaisical attitude" by Gov. Ron DeSantis, a Republican, about masking. She said she will continue to wear her mask to protect against the coronavirus, including around her 55-and-older home community and on the plane when she travels to Kentucky in a few weeks.
“Especially in a plane where that air is recirculating,” said Pettus, 71, an independent who leans toward the Democratic Party. “I think people are really dumb not to wear their mask. But, hey, that’s their decision, and if they want to get sick that’s fine. I’m not going to.”
But Kriste Lee, who works in sales in South Florida, can’t wait to fly mask-free the next time she travels next month.
“I really wish I was on a plane when they made that announcement," said Lee, 47. "I would have been dancing up and down the aisle.”
The continued support among Americans overall for mandating masks on transportation comes even as worries about COVID-19 are among their lowest points of the past two years. Just 20% now say they’re very or extremely worried that they or a family member will be infected. That's down slightly since 25% said the same just a month ago and from 36% in December and January as the omicron variant was raging. Another 33% now say they are somewhat worried, while 48% say they’re not worried at all.
Count Betty Harp, of Leitchfield, Kentucky, as among the “very worried” and not because she's turning 84 next month. She said she takes care of her large house and yard by herself, does a lot of canning and is in "fantastic health for my age.” But she's lost a lot of friends and family to the virus, which has killed nearly 1 million people in the United States.
“I know COVID is still here. It's still around,” said Harp, who described herself as a Republican-leaning independent. “I think we should all be wearing masks for a little while longer.”
In another AP-NORC poll conducted last month, 44% of Americans still said they were often or always wearing face masks outside their homes, though that was down significantly from 65% who said that at the beginning of the year.
The latest poll also shows about half of Americans favor requiring masks for workers who interact with the public, compared with about 3 in 10 opposed. Support is similar for requiring people at crowded public events such as concerts, sporting events and movies to wear masks.
On these, too, there are significant partisan divides. Seventy-two percent of Democrats favor requiring people attending crowded public events to wear masks, while among Republicans, 25% are in favor and 49% are opposed. The numbers are similar for requiring masks for public-facing workers.
Lee, who said she doesn't “do politics,” wondered aloud why people are complaining about the judge's ruling and said nobody is stopping anyone from wearing masks if they want to.
“We all have our beliefs and obviously different views,” said Lee, who is unvaccinated. “Mine are definitely different from the people who are angry and upset.”
Employed Americans are divided on whether people working in person at their own workplaces should be required to wear masks. Thirty-four percent say they’re in favor of that requirement, 33% are opposed and 33% are neither in favor nor opposed. Among workers who are Democrats, 48% are in favor and 18% are opposed. Among workers who are Republicans, 53% are opposed and 18% are in favor.
Mike Osterholm, director of the University of Minnesota’s Center for Infectious Disease Research and Policy, said messaging over the mask mandate would have been more effective if it required N95 or KN95 respirators, which are more effective at preventing transmission of the virus.
"But you have actually created a real challenge with yourself with the public who are now being selective if not outright angry about these mandates,” said Osterholm, who added that he will continue to wear his N95 mask on planes.
Related Stories
4d ago

Looking to get away? Demand is soaring, and so are flight costs! Here are some ways to save.

See all
2d ago

The New Normal: Should young children get a COVID-19 vaccine? This is what one expert says.