By: News 12 Staff
Some CVS locations in New Jersey began taking appointments for the COVID-19 vaccine Thursday morning, and slots for those appointments were filled within just a few hours.
News 12 New Jersey spoke with a Somerset County couple who even lost their slot while trying to figure out the system. Frank Katusa, of Franklin Township, says that he has been trying for weeks to get appointments for him and his wife. 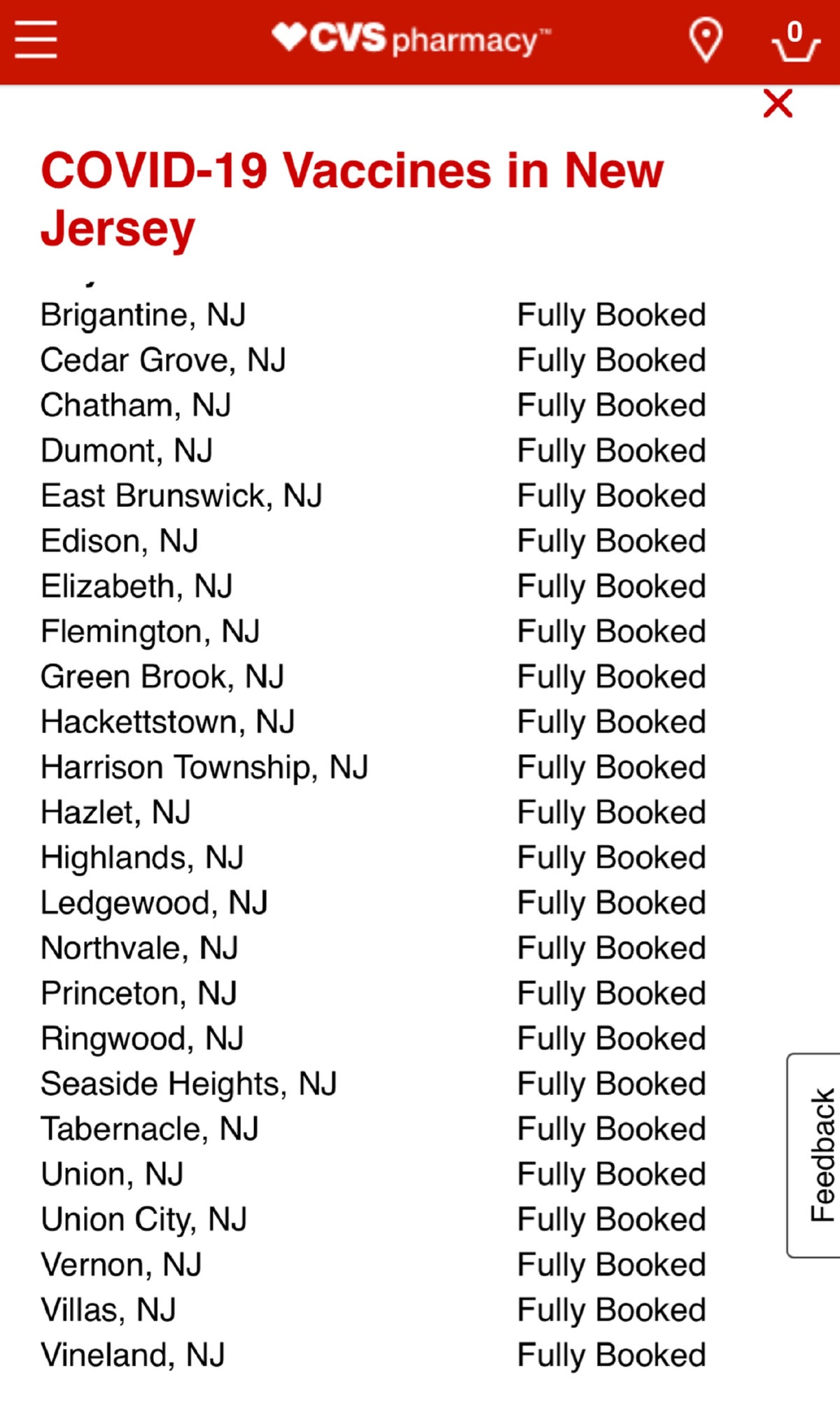 “We signed up for Robert Wood Johnson, we signed up for Meridian Health, we signed up down in Atlantic City,” Katusa says.
He says that he was hopeful when CVS began taking appointments. He was able to get his but ran into an issue when trying to book his wife’s appointment.
“Within maybe 10 minutes, I get a notice that I have an appointment for her…so, I clicked for the second appointment and it tells me ‘We don’t have openings,’ – vaccines for the second appointment and find another area. So, I tried something very remote, which was less populated, which was Villas, New Jersey,” Katusa says.
MORE: Where can I get the COVID-19 vaccine?
VIRUS TRACKER: New York, New Jersey, Connecticut coronavirus cases and deaths
MORE: New Jersey Coronavirus Dashboard
RELATED: Tracking US COVID vaccinations
But he says that no appointments were available when he went to book the second dose down in Cape May County. And he says that after 30 minutes of trying to find another CVS location in the state, the system timed out and the whole appointment – including the first dose – was canceled.
“It’s like they push your hopes up and then it’s like, oh no, so you start again and you try every ZIP code, every town that’s on the list,” he says.
CVS says 25,000 doses of the COVID-19 vaccine were sent to New Jersey, which means 25,000 appointments were scheduled for Thursday morning. The shots will be administered beginning Friday morning. More appointments will be made available in the future.
“As the vaccine shipments are received by the store, then that’s when the next allocation of appointments or allotment of appointments will open up on the website,” says Christina Cacchili of the CVS COVID Task Force. “I would just say check frequently and each week we’ll be receiving an additional allocation, so we can open up more appointments.”
Rite Aid will also begin administering vaccines in New Jersey. Representatives from the pharmacy say that their scheduling site is not yet active.
Related Stories

Health officials: COVID-19 hospitalizations from Omicron peaked about 2 weeks ago

FDA curbs use of antibody drugs sidelined by Omicron

Health officials: COVID-19 hospitalizations from Omicron peaked about 2 weeks ago

FDA curbs use of antibody drugs sidelined by Omicron

Rutgers, Princeton requiring all students, staff to get boosted before return to campus at the end of the month