SNAPSHOT - A look at developments one year after the Jan. 6 Capitol attacks 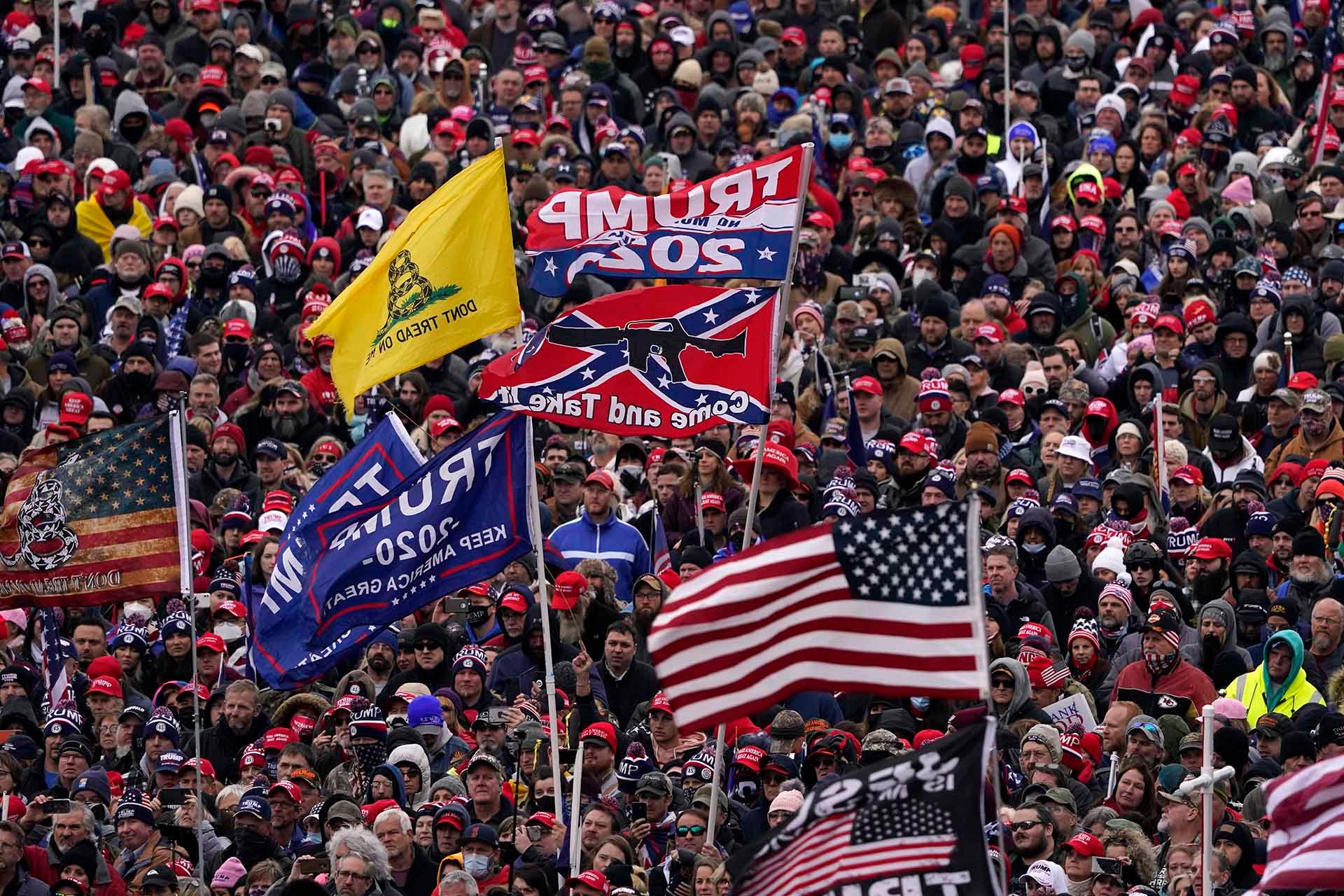 On what was supposed to be a day of routine procedure, supporters of former President Donald Trump stormed and attacked the U.S. Capitol in a day that shook America to its core.  Photos, videos - and even the social media accounts of the attackers - showed images of vandalism and violence inside the heart of American Democracy.
In the year following the attack, rioters have been arrested and sentenced.  Capitol Police have reviewed and changed their operations. Some Americans think the incident was a violent attack on democracy, while others do not.  Some have even supported wild conspiracy theories that present an alternate reality.
Here is a summary of developments one year after the attack.
Compiled with Associated Press reporting

'WE ARE IN A BATTLE FOR THE SOUL OF AMERICA' 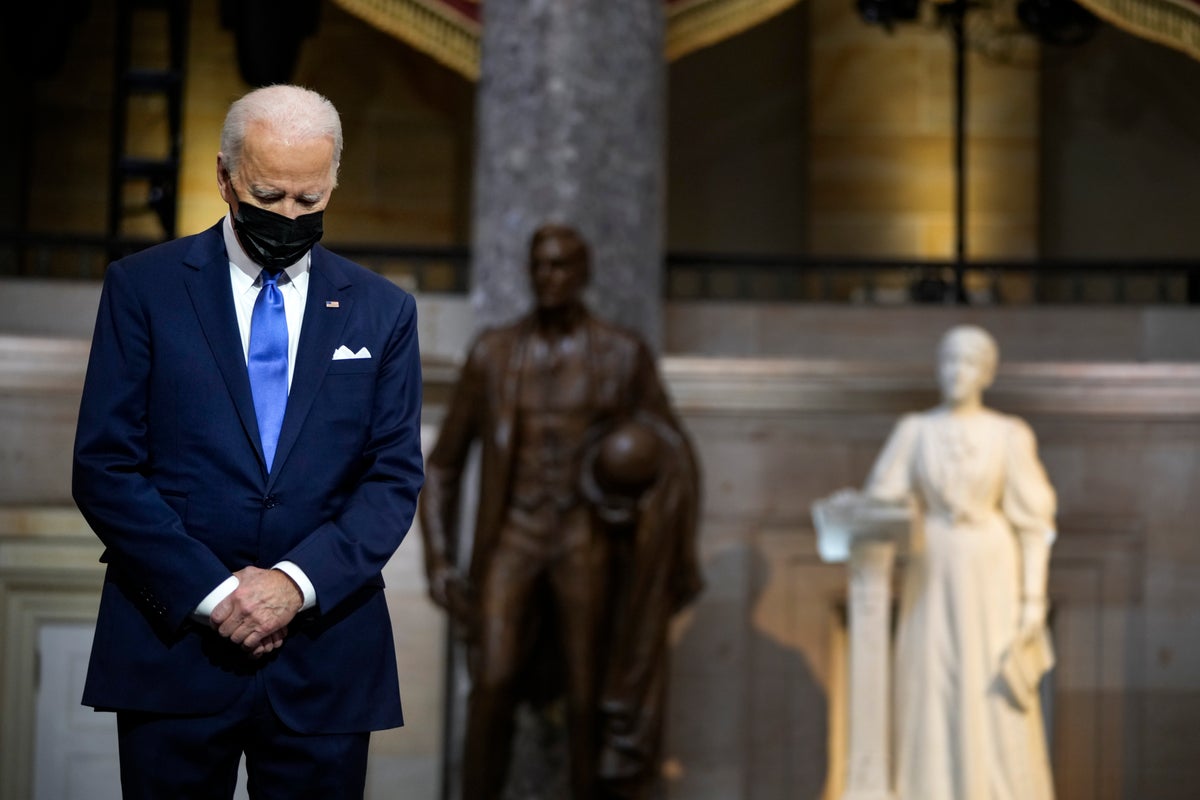 President Joe Biden listens as Vice President Kamala Harris speaks from Statuary Hall at the U.S. Capitol to mark the one year anniversary of the Jan. 6 riot at the Capitol by supporters loyal to then-President Donald Trump, Thursday, Jan. 6, 2022, in Washington. (Drew Angerer/Pool via AP)
President Joe Biden has marked the anniversary of the violent Capitol insurrection by forcefully condemning Donald Trump’s election “big lie” that sparked the deadly breaching of the building and continues to motivate deep national division. He declared he will fight for “the soul of America.” Lawmakers are holding events Thursday to reflect on the violent attack by supporters of then-President Trump. The ceremonies were widely attended by Democrats, but almost every Republican on Capitol Hill was absent. It's a stark reminder of the rupture between the parties, worsening since hundreds of Trump’s supporters violently pushed past police, broke through the Capitol's windows and interrupted the certification of Biden’s victory.
READ THE FULL STORY 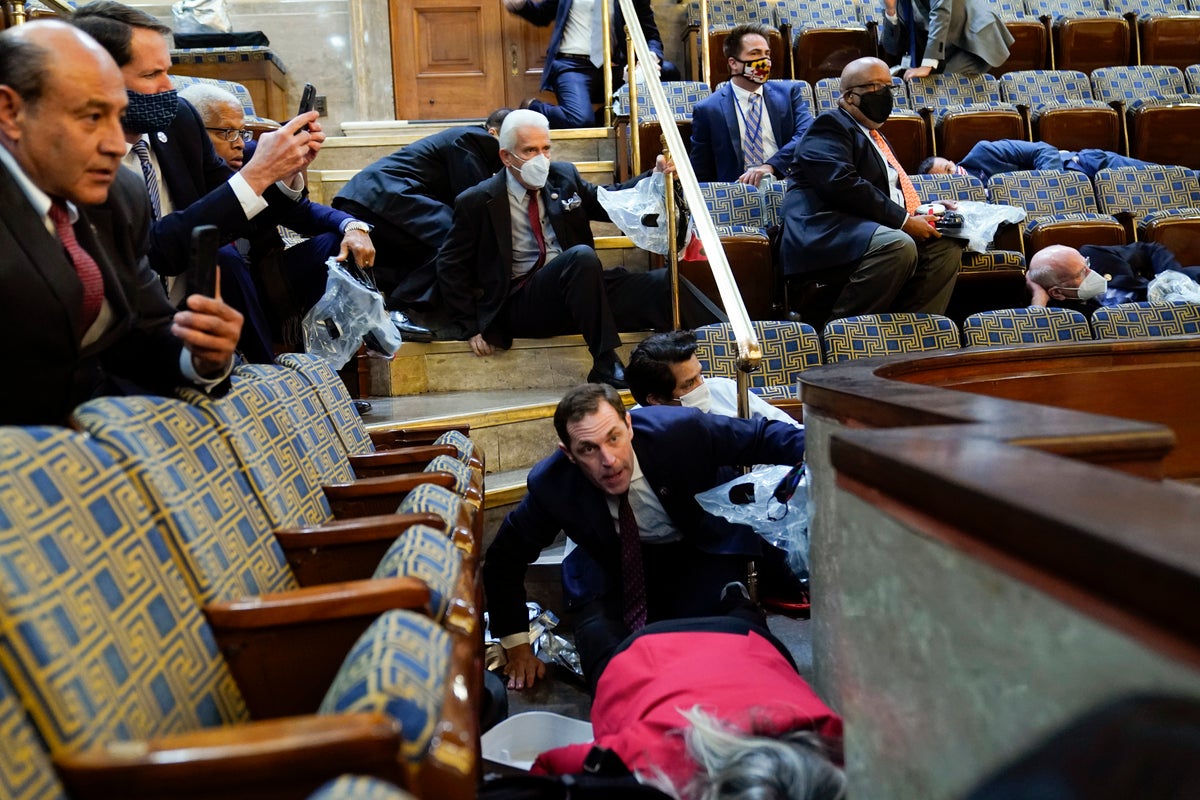 Members of Congress shelter in the House gallery as rioters try to break into the House Chamber at the U.S. Capitol on Jan. 6, 2021, in Washington. (AP Photo/Andrew Harnik, File)
A year after the Jan. 6 insurrection, some of the lawmakers who were trapped in the upper House balcony that day are still recovering from lingering trauma. Those lawmakers were the last group to be evacuated, after the rest of their colleagues had been ushered out from the floor below. The roughly three dozen lawmakers were evacuated safely, along with reporters and staff who were trapped with them. The police just barely held off the rioters from getting inside. But in interviews with The Associated Press a year later, many of the lawmakers recall that they thought they were going to die.
READ THE FULL STORY

'HATRED IN THEIR EYES' 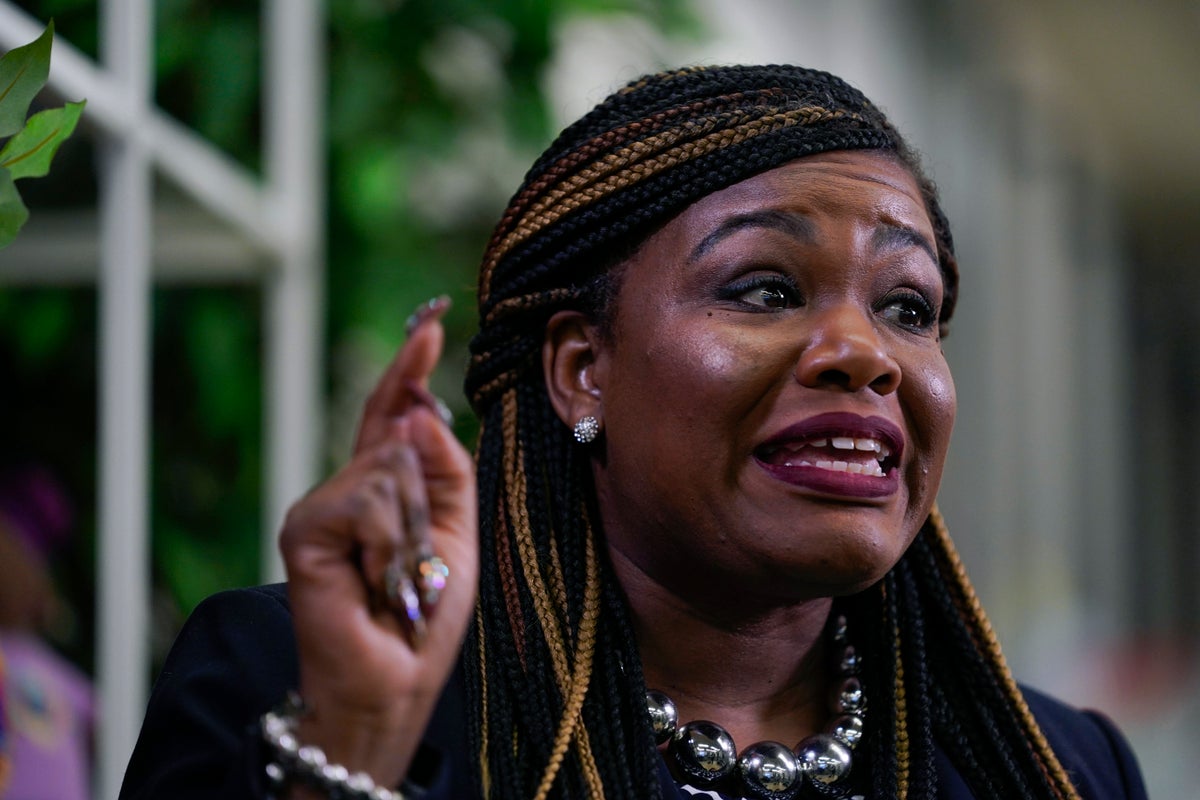 Rep. Cori Bush, D-Mo., speaks during an interview Nov. 12, 2021, in Northwoods, Mo. Bush is no stranger to protests. She spent years marching the streets of St. Louis and Ferguson, Mo., rising to public office on the strength of her activism. But as she looked out the window of the Capitol on Jan. 6, 2021, only her third day as a member of Congress, she knew what was about to take place would be no peaceful protest. The Confederate flags in the crowd, and the makeshift noose and gallows erected on the Capitol grounds, spoke to a more sinister reality. (AP Photo/Jeff Roberson, File)
The Jan. 6 U.S. Capitol insurrection by pro-Trump supporters and right-wing group members shattered the sense of security that many had long felt at the Capitol as rioters forcefully delayed the certification of President Joe Biden’s election victory. But for people of color, the attack was more than a violent challenge to a free and fair election — it was an eerily familiar display of white supremacist violence, this time at the very seat of American democracy. A year later, many in the Capitol recall the racist rage of that day, which extended not only to lawmakers of color but also to the police officers defending the seat of democracy.
READ THE FULL STORY 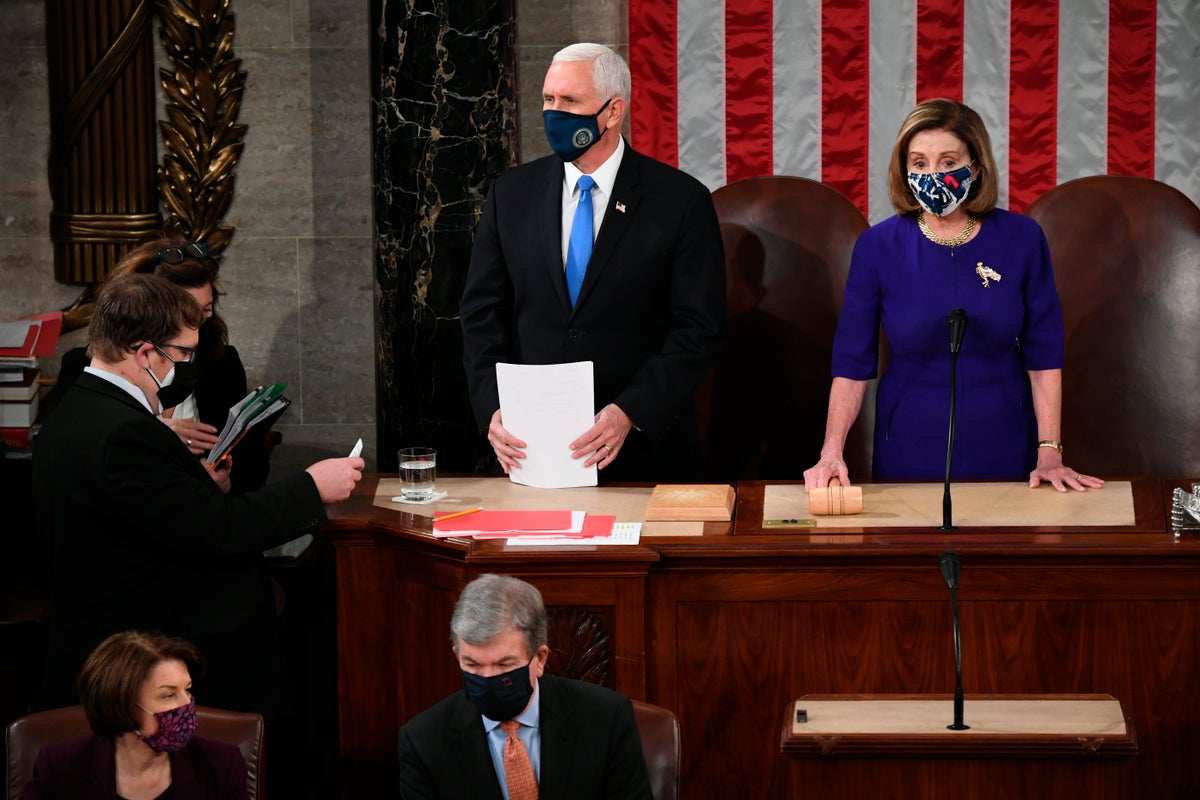 Vice President Mike Pence presides over a joint session of Congress as it convenes to count the Electoral College votes cast in November's election, at the Capitol in Washington, Jan. 6, 2021. Speaker of the House Nancy Pelosi, D-Calif., stands at right. Pence did not bend to President Donald Trump’s extraordinary pressure to intervene and presided over the count in line with his ceremonial role. He announced the certification of Biden’s victory before dawn, hours after a mob of Trump’s supporters violently ransacked the building. (Saul Loeb/Pool via AP, File)
In the weeks before the Jan. 6, 2021, certification of President Joe Biden’s victory, a small group of House Democrats huddled to contemplate what they would do if then-Vice President Mike Pence tried to overturn the presidential election. They never came up with a perfect answer. Democrats and some Republicans warn that democracy would have hung by a thread if Pence had tried in some way to block the count or unseat legitimate electors, and that our current laws, courts, customs and regulations may not be strong enough to withstand that kind of pressure if anyone attempts it again.
READ THE FULL STORY 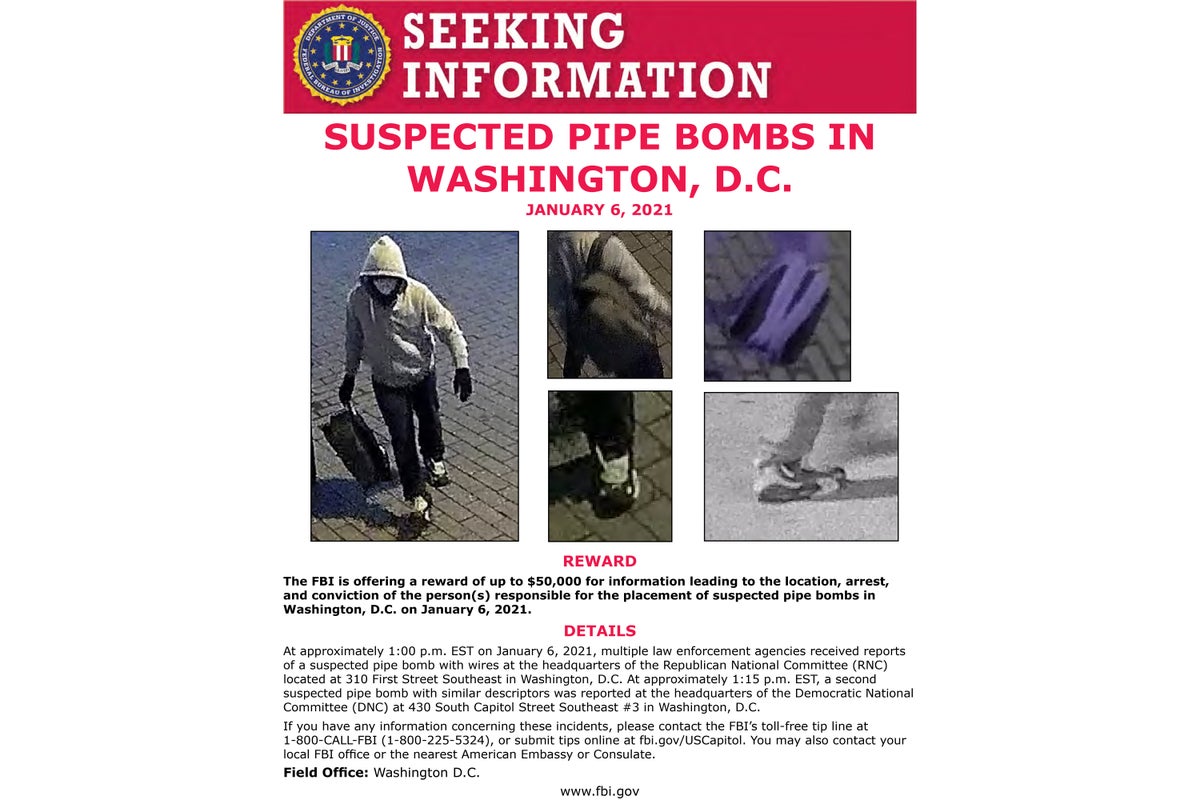 This image from an FBI poster seeking a suspect who allegedly placed pipe bombs in Washington on Jan. 6, 2021. Just before the U.S. Capitol was stormed by a sea of pro-Trump rioters the pipe bombs discovered. It quickly became one of the highest-priority investigations for the FBI and the Justice Department. Now, a year later, federal investigators are no closer to learning the person’s identity. And a key question remains: was there a connection between the pipe bombs and the riot at the Capitol? (FBI via AP)
A year after thousands of pro-Trump rioters stormed the U.S. Capitol, hundreds of people who assaulted officers and committed other crimes still haven't been caught. The investigation into last January's insurrection has been a massive undertaking for federal law enforcement officials. More than 700 people have been charged with federal crimes stemming from the Jan. 6 attack. Arrests are still being made regularly. But 250 people seen on video assaulting police at the Capitol still haven’t been fully identified and apprehended by the FBI. Another 100 are being sought for other crimes tied to the riot. For FBI agents working the cases, the job is far from over.
READ THE FULL STORY 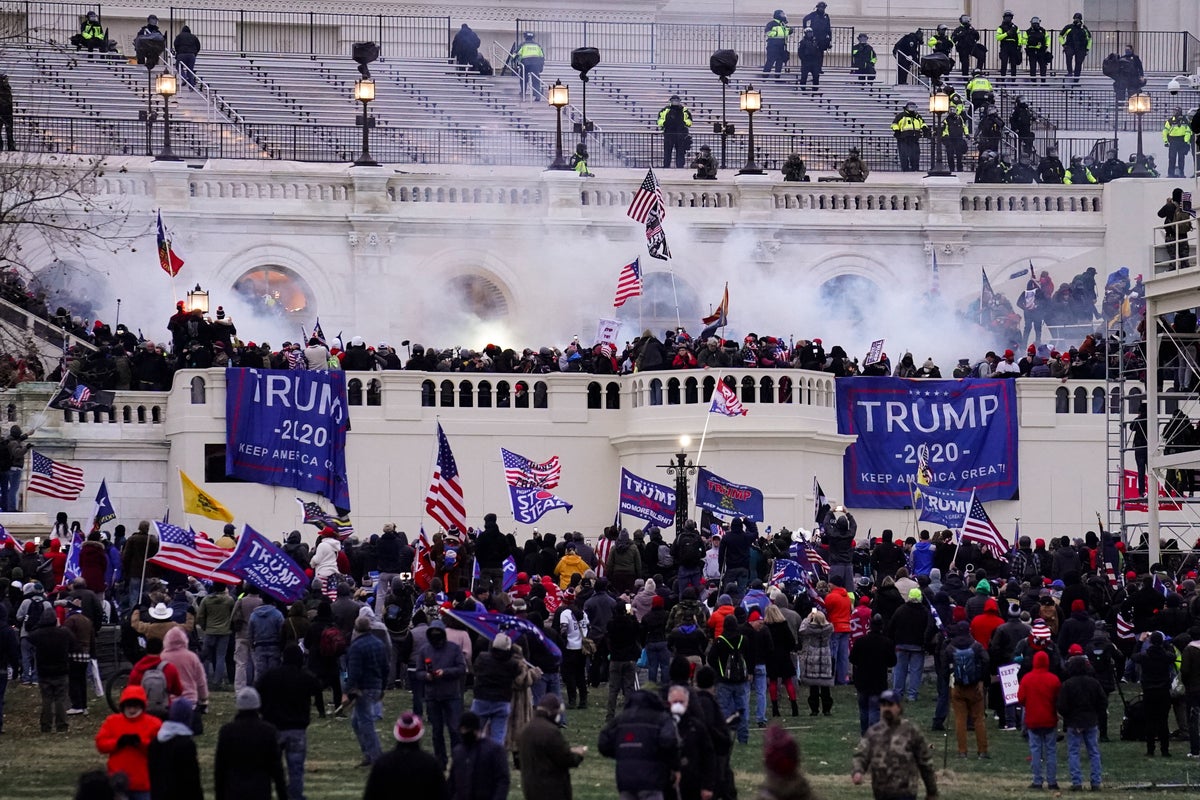 Violent protesters, loyal to President Donald Trump, storm the Capitol, Jan. 6, 2021, in Washington. (AP Photo/John Minchillo, File)
Beneath the glare of television cameras, it seemed hard not to see the Jan. 6 Capitol riot for what it was. The violent storming of the Capitol by Donald Trump supporters bent on upending the election of President Joe Biden was as clear as day, live-streamed in real time. Yet a year later, there is far from national consensus on a where-were-you moment in U.S. history. A Quinnipiac poll found that 93% of Democrats considered it an attack on the government, but only 29% of Republicans agreed. Since that day, separate versions -- one factual, one fanciful -- have taken hold.
READ THE FULL STORY 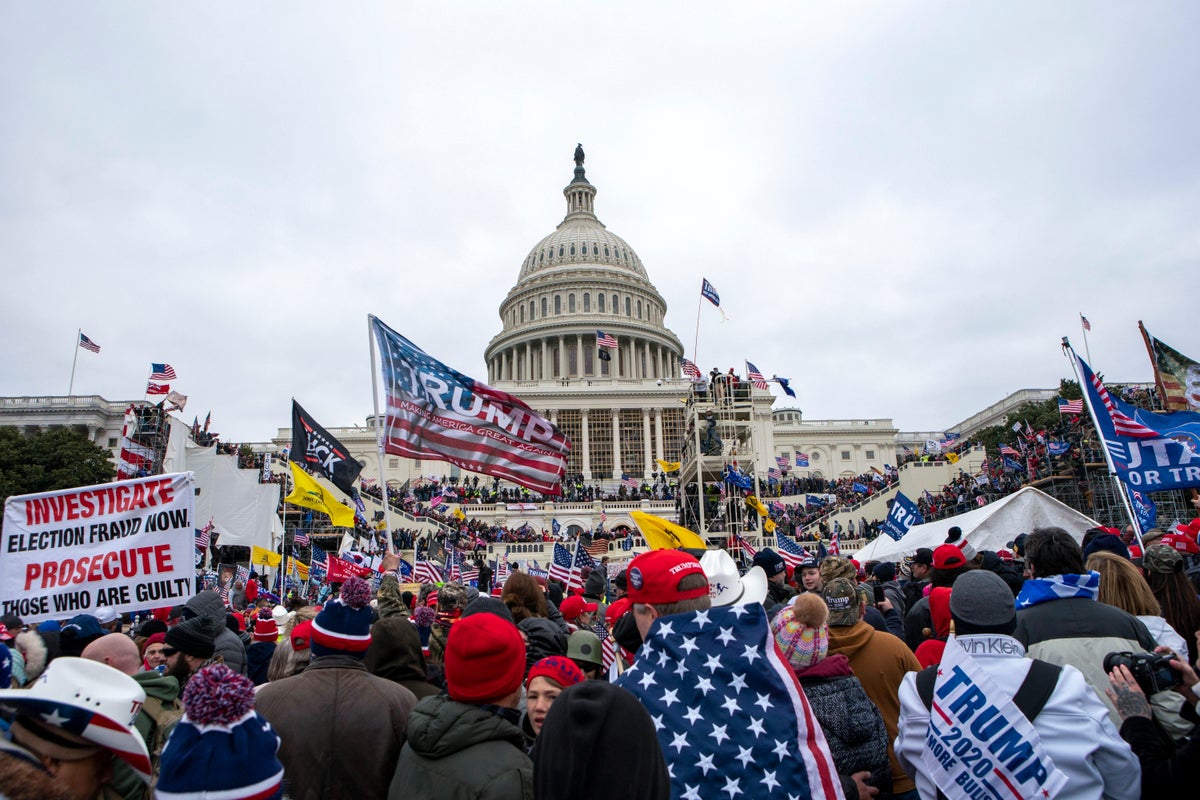 A YEAR OF CHANGE 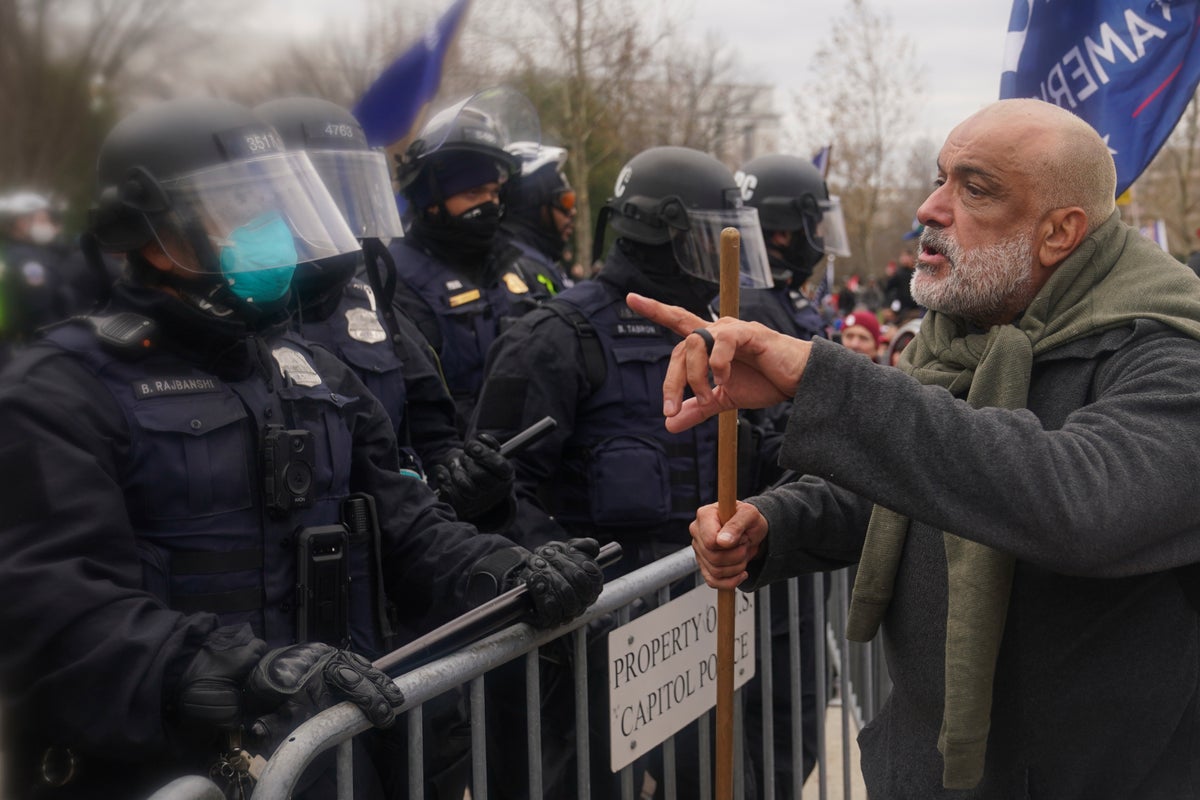 A protester confronts Washington Metropolitan Police department officers as they assist U.S. Capitol Police with rioters on the West Front of the U.S. Capitol on Jan. 6, 2021, in Washington. (AP Photo/John Minchillo)
U.S. Capitol Police were ill-prepared for the thousands of protesters who descended on Capitol Hill during last year's insurrection. Dozens of officers were severely injured, bloodied, bruised and beaten. In the year since, the force dedicating to protecting the Capitol is still reeling as investigators work against an unprecedented number of threats to lawmakers. The police department has made major changes to the way it gathers and shares intelligence, increased equipment and riot gear for officers and expanded mental health services. Yet questions remain about whether the Capitol is adequately protected.
READ THE FULL STORY

FACING JUSTICE AND PAYING THE PRICE 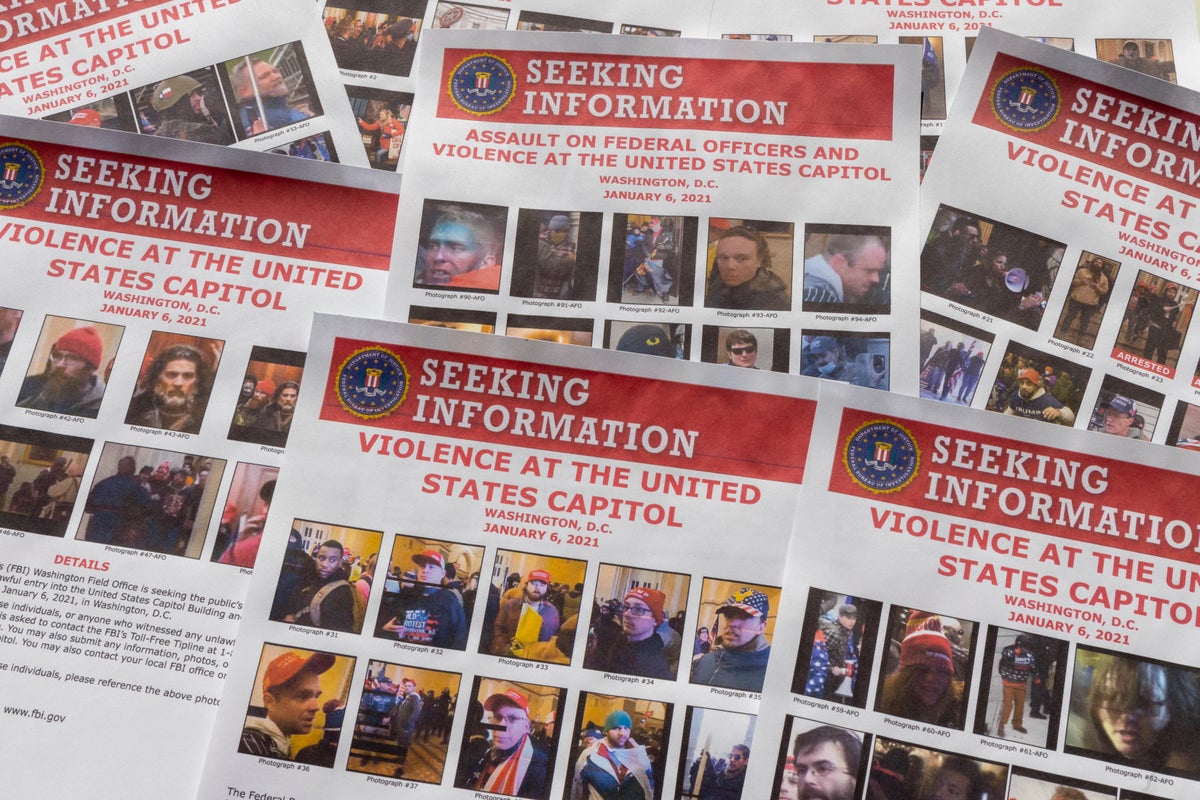 Seeking information flyers produced by the FBI are photographed on Dec. 20, 2021. The Justice Department has undertaken the largest investigation in its history with the probe into rioters who stormed the Capitol on Jan. 6. (AP Photo/Jon Elswick)
Many rioters who stormed the U.S. Capitol a year ago are shedding tears and expressing remorse when judges sentence them for their part in the insurrection. But their excuses for joining the mob often fall flat in the face of overwhelmingly contradictory evidence. Judges have sentenced 71 defendants who pleaded guilty to federal charges related to the Jan. 6 riot. An Associated Press tally finds that 31 defendants have been sentenced to imprisonment or jail time already served, including 22 who received sentences of three months or less. An additional 18 have been sentenced to home confinement. Judges often cite remorse as a key factor in deciding sentences.
READ THE FULL STORY 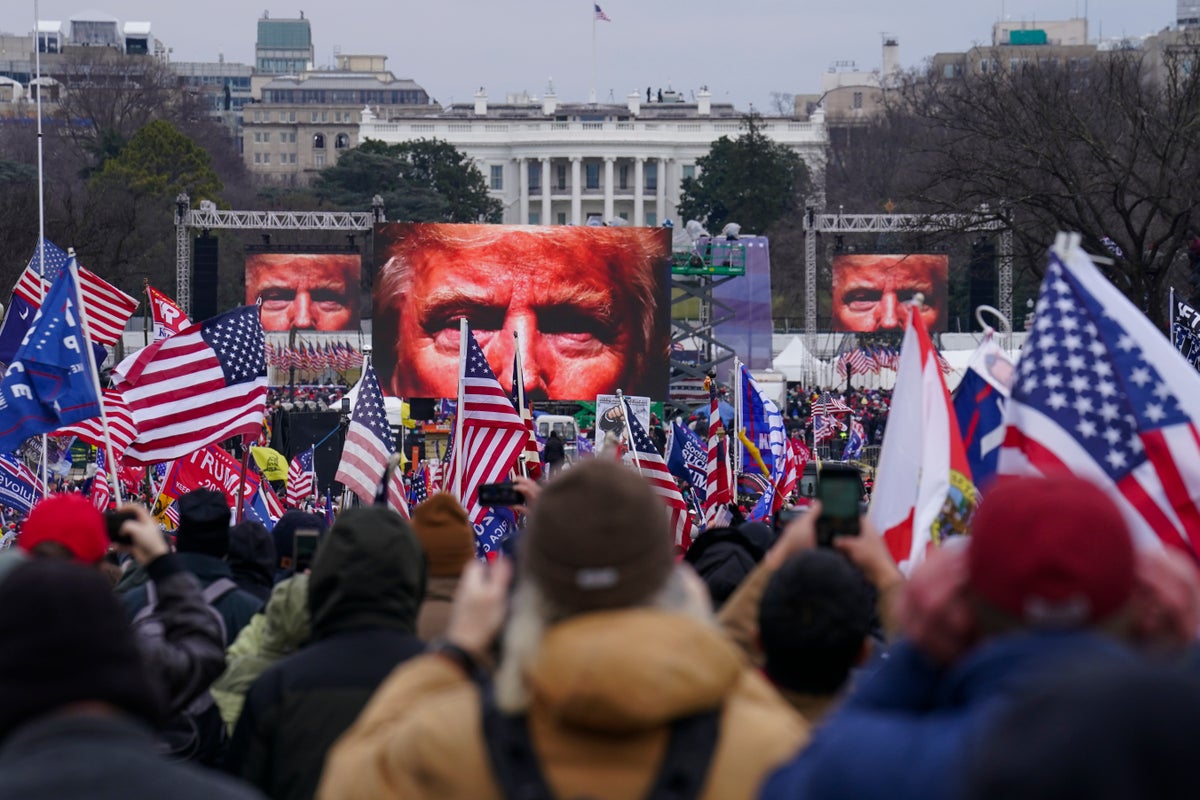 In this Jan. 6, 2021 photo, Donald Trump supporters participate in a rally in Washington, near the White House. (AP Photo/John Minchillo, File)
The events from last Jan. 6 in Washington unfolded on live television and they've been the subject of congressional hearings and criminal proceedings since then. Yet hoaxes and conspiracy theories about what happened that day continue to circulate on cable news shows and social media. Falsehoods have excused former President Donald Trump of responsibility for the Capitol insurrection. They've minimized the mob’s violence. And they've cast the rioters as martyrs. And those falsehoods have muddied the public's understanding of what happened that day in the nation's capital and are helping to sustain Trump's baseless claims of fraud in the free and fair election he lost in 2020.
READ THE FULL STORY
Related Stories
2h ago

Political expert: Biden has not fully met his expectations 1 year into presidency

State Sen. Haskell solidifies his seat at the table with his new book

See all
2h ago

Political expert: Biden has not fully met his expectations 1 year into presidency