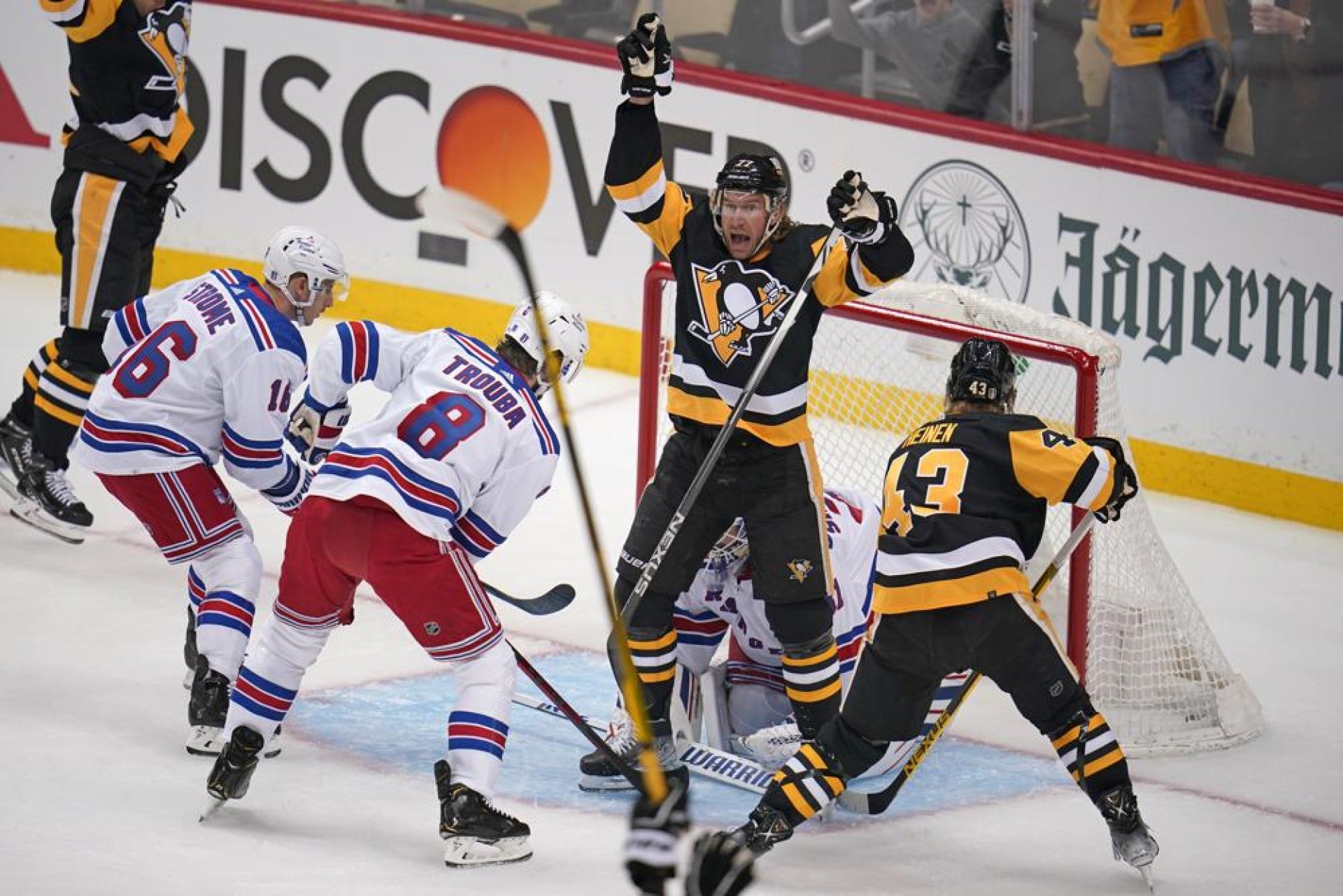 Danton Heinen’s first playoff goal in three years just past the midway point of the third period broke a tie to lift the Pittsburgh Penguins to a 7-4 victory over the New York Rangers on Saturday night to take a 2-1 lead in their first-round Eastern Conference series.
Pittsburgh blew a three-goal first-period lead but recovered behind the play of third-string goaltender Louis Domingue and Heinen, who jumped on a loose puck near the New York goal line and flicked a shot by Alexandar Georgiev 11:02 into the third to put the Penguins in front to stay.
Game 4 is Monday night in Pittsburgh.
Evan Rodrigues had two goals and assisted on another for the Penguins, who won despite any member of the top line of Sidney Crosby, Jake Guentzel and Bryan Rust not recording a point until Guentzel’s empty-netter with 2:14 to play sealed it. Jeff Carter also scored twice for the Penguins while Brock McGinn started the scoring on a wild night with his first goal of the playoffs.
Domingue made 32 saves and even recorded an assist in his second playoff start. The 30-year-old journeyman put together a flurry of stops early in the third period with the Penguins on the penalty kill to set the stage for Heinen’s heroics.
Kaapo Kakko, Frank Vatrano, Artemi Panarin and Andrew Copp scored for the Rangers. Georgiev finished with 19 saves on 20 shots after taking over for Vezina Trophy-favorite Igor Shesterkin, who was chased after allowing four goals in the first period.
The Penguins sent Shesterkin to the bench with a dazzling first period in which they erupted for four goals — two by Rodrigues — only to promptly squander it with a second-period meltdown culminated by a turnover by defenseman Kris Letang that led directly to Copp’s short-handed tally that tied it at 4.
The Penguins earned a split in New York to start the series by relying on the top line of Crosby, Guentzel and Rust to do most of the heavy lifting. The trio scored five of Pittsburgh’s six goals at Madison Square Garden, the other provided by Evgeni Malkin’s game-winner in triple overtime in the opener.
Still, Penguins coach Mike Sullivan insisted he liked the chances created by the role players on his star-laden roster. The opportunities finally turned into goals in the first period, with Rodrigues regaining the touch that came so easily during his startling first half of the season, when his production helped keep Pittsburgh afloat as it dealt with a rash of injuries and a COVID-19 outbreak.
The teams traded goals in the opening 5 minutes before the Penguins overwhelmed Shesterkin by throwing bodies and pucks at the net with equal abandon. Carter’s deflection from in front off Rodrigues’ shot gave Pittsburgh a 2-1 lead. Rodrigues made it 3-1 when he followed his own slap shot as it smacked off the end boards, pouncing on the rebound to beat Shesterkin. He pushed it to 4-1 when a Brian Boyle check created a turnover that left Rodrigues all alone in the slot.
The first capacity playoff crowd at PPG Paints Arena in three years was in full throat as it lauded Shesterkin — whose 118 combined saves in the first two games was an NHL record — with chants of “IIIIIIIGOOORRR.”
Shesterkin stayed on the bench to start the second period — just the third time he’s played only 20 minutes — and the Rangers responded with a massive push in front of Georgiev to rally.
Vatrano’s second of the playoffs 6:51 into the second pulled New York within two. Panarin’s second just 67 seconds later made it a one-goal game and Copp provided a tying score that seemed inevitable after Kevin Rooney stripped Letang and darted to the net. Domingue made the initial save but Copp knocked in the loose puck as the net was dislodged to draw the Rangers even.
NOTES: The Penguins played without D Brian Dumoulin (lower-body injury) for the second straight game. Forward Rikard Rackell also missed his second straight game after leaving Game 1 following a hit to the head. ... Pittsburgh G Tristan Jarry skated on Saturday morning, his first on-ice work since suffering a foot injury in mid-April. ... Rangers played without injured F Tyler Motte (upper body), F Barclay Goodrow (lower body) and D Ryan Lindgren (lower body).
Related Stories
Aug 09, 2022

Gallant: Rangers to focus on their game, not Sydney Crosby and co.

Quest for the Cup: Fans excited as Rangers kick off playoffs against Penguins

Yankees place RHP Holmes on injured list with back soreness